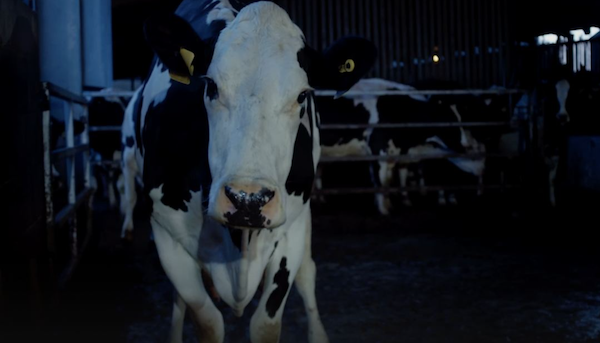 I doubt that film maker Andrea Arnold intended her first feature length documentary Cow to act as propaganda for the vegan cause.  But it may well become so.

The film follows the life of one dairy cow, Luna, for four years.  It casts no judgements.   There is no cosy, anthropomorphic commentary telling us what she is experiencing.   The camera just observes and records.

The film opens with Luna giving birth to her latest calf.  She licks him clean, he goes to suckle but he is whisked away and fed from a bottle, perhaps to be raised for meat?   Luna will doubtless never see him again.   She is immediately led off to the shackles of the milking machine with her fellows.  Is that despair and frustration we see in her eyes – or are we projecting our own emotion?   By the time this scenario has been enacted again and again however, we can be pretty sure those eyes are transmitting some emotion.  And it’s not joy.

Apart from the treadmill of the daily milk extraction factory, the time comes when Luna has to be impregnated again, so the cycle can be renewed.  There is almost a rare moment of tenderness in Luna’s life here, when the bull appears to lick her hide with what could be affection, before he gets on with the business in hand.   But maybe he was just checking that she tasted right for fertility and he wouldn’t be wasting his time?

The environment Luna inhabits is depressing and ugly.  Cowsheds and the milking factory.   The herd is tended largely by robust young women.  They are not unkind.  Just efficiently doing their job but apparently largely indifferent to the animals they tend.

The only joy comes with the summer when the herds are put out to pasture.   We see them galloping down the lanes to the fields, like children just let out of school.  And we rejoice to see them grazing peacefully in the fields.  Too soon though summer is over and it’s back to the gloomy routine of the sheds.

And the end of Luna’s story?   Well, there are no retirement plans for dairy cows once their usefulness to us is over.

It’s all a long way from the pre World War 2 world of All Creatures Great and Small, where farmers and the local vet tend personally with concern and largely respect to the individuals in the herd.   Did that level of care ever really exist in our relationship with the animals who feed us or was it a cosy fantasy?   Is it something we can revive or create or has our much larger population with its incessant demand for cheap food made that impossible?

It has now been legally recognised that animals are sentient beings.  They have feelings – emotions.  It is part of evolution for one species to feed off another.   Human was after all once a tasty lunch for the lion and tiger until we got so clever with the weapons and therefore climbed to the top of the food chain.  But exploitation is another matter.

So is it time to rethink our relationship with the animals who feed us?  And if so, how?

None of these questions are specifically asked in Ms Arnold’s disturbing film, which just observes without judgement.  But they may well arise in the mind of the viewer.