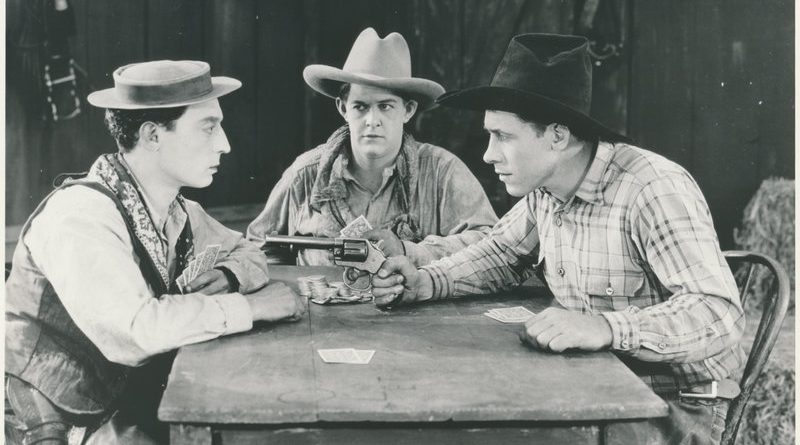 Buster Keaton is a physical enigma, a hyperactive riddle made flesh.

The gags in his films are all about his body interacting with the world in a frenzied, athletic manner that is weighty with the incipient pointlessness of his actions.

That is why the films are never laugh-out-loud funny. Instead, they fill the viewer with a kind of dread that is also allayed.

There is a naturalism to the images in his films. Keaton uses long shots that show his whole body acting a gag out with little in the way of editing. This gives them a powerful simplicity. Plus, we know it is really him really doing this stuff.

Even though the film sequences are largely about his actions, he is not at the centre of things. The frame shows him as part of a wider world that is also fizzing with activity and energy.

If these were Charlie Chaplin films, every image would be burnished with the charisma of the lead character. But Buster fizzes along with the world.

Our Hospitality was Keaton’s first major feature film and it is full of signature elements: spectacular action sequences, attention to historical detail, physical gags that are woven into the narrative structure in a properly dramatic manner.

William McKay (Keaton) journeys to the South to inherit the family shack. On the way he befriends Virginia (Talmadge, then Mrs Keaton) and receives an invite to dinner at her plush family home. Neither of them are aware that their families are engaged in a murderous, cross-generational feud. By the time William turns up for dinner, Virginia’s father and brothers know his identity and must juggle good ol’ Southern hospitality and homicidal vengeance.

Our Hospitality features a rightly famous whitewater river sequence that culminates in a dramatic waterfall escapade. The river sequence was actually filmed in a raging river and Keaton almost drowned during filming.

Go West sees luckless drifter Friendless (Keaton) take a job as a cowboy on a ranch. He befriends a cow (Brown Eyes) and sets out to rescue her from her slaughterhouse fate. Keaton looks completely lugubrious in this one: he can’t even smile when a man with a gun orders him to. The finale is a surreal 300 cow rampage through downtown Los Angeles, with Keaton dressed as a red devil at the head of the invasion, followed by cops and cows.

College sees bookworm Ronald (Keaton) try to win his college sweetheart by becoming a jock. There is an extended stadium-set athletics sequence that’s like Triumph of the Will meets Revenge of the Nerds. There’s also a boat race sequence in which Ronald features as both coxswain and human rudder.