Philip Friedman is a brilliant literary miscreant whose personality flaws and obvious talent make for a witty and jarring character study. This unlikeable character is like no one you have ever met before. His insufferable character and tendency for rapid-fire ramblings makes Listen Up Philip a truly quirky film.

With an episodic narrative, all of the film’s characters live in an artistic milieu with the film’s principal character showing events during and after his absence in New York as he leaves behind him a trail of destruction.

The film is narrated by Eric Bogosian (American actor, playwright, monologist and novelist known for the 1998 film Talk Radio), a bold stylistic choice. As the narrator is omnipresent and omniscient this gives great scope in dissecting the film’s narratives, relationships and detailing emotions that aren’t immediately obvious.

This indie film is an unusual conception. With its shaky handheld visual style and soothing jazz soundtrack, the camera remains tight, trapping the characters in their environments.

The film opens as Philip is working on his eagerly awaited, sure-to-succeed second novel. Philip receives a proposal from his literary idol Ike Zimmerman to stay at his country retreat in order to continue the writing that he feels unable to complete in New York. However, what this does is afford Phillip the time to focus on his favourite subject; himself. In many ways Phillip is contradictory, as he is at the same time unfeeling and overly sensitive, making it hard to guess his temperament at any given time.

After taking up Ike’s offer he opts to leave his long-suffering girlfriend Ashley in New York indefinitely, signaling the dissolution of the relationship. Moss embodies the role of Ashley with proficiency, at one point providing a pitch perfect performance in reaction and emotion that really signals the films obvious strengths. As Ashley she is the inverse of Philip, valuing hard work and community.

Similarly, Pryce gives a first rate performance as Ike Zimmerman, Philip’s older more tiresome self, as the pair truly cause ructions throughout the film. In many ways Ike presents a greater problem than Philip in that his character is set on dissolving all forms of social relationships, including his marriage and relationship with his daughter Melanie. From this view, Melanie’s character represents what the actions of men like Phillip truly cause to those around them, as she remains resentful towards her emotionally absent father, damaged by their relationship.

In many ways Phillip is a cliché, despite the fact he thinks himself to be the ultimate individual, continually misunderstood by those around them. What remains clear is that Philip, like many artists, is far too in touch with his selfish emotions.

In many ways the film is painfully self-reflexive, like the narrative and the main character. Ultimately, like Ike, Phillip enters into a self-made disconnect. Through his insatiable ego, Philip does “…not get involved with anybody…in a human way”. Perhaps the film’s only fault is that goes on a bit too long as we witness Philip’s growing self-imposed exile. 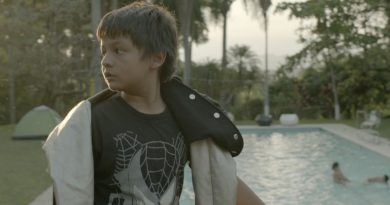