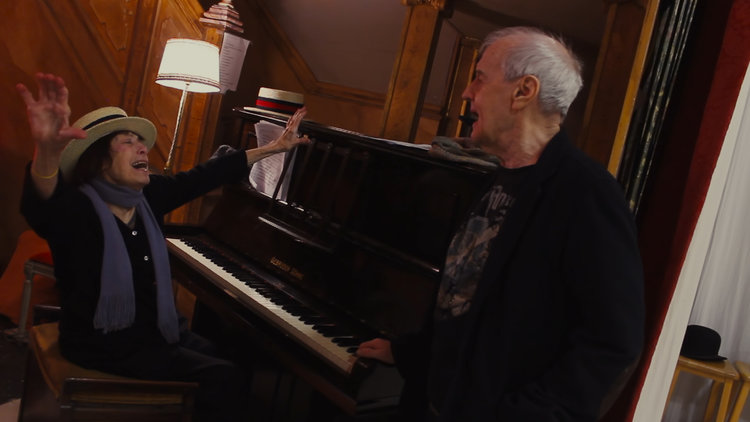 In the seventy odd years they have been together, Barry and Joan Grantham embody a living history of musical and comedy entertainment, as this delightful documentary demonstrates.

Though he must be in his eighties, Barry, who as a ballet trained boy danced in the films The Red Shoes and Tales of Hoffman, can still do a soft shoe shuffle better than one half his age.  While Joan’s still nimble fingers tickle the ivories, playing songs old and new and often her own compositions. And she is full of anecdotes about the shows they have done together and the stars they have worked with.

The couple first met when they were in the cast of the musical Song of Norway in the 1940s.  They lost touch but show biz being what it is, their paths crossed again a year later.  They got together professionally and personally, married in 1962 and their show has always gone on.

The couple variously talk vividly about their past triumphs, illustrated with stills from their shows – sadly no video from the fifties and sixties or even the eighties.  They were part of the last days of the variety halls, in at the start of cabaret entertainment on ocean liners, musicals, pantomime, seaside summer shows – you name it, they’ve done it.

Then Barry became interested in the Commedia dell’Arte, the art of mime and mask, Harlequin, Pierrot et al., created in Italy in the 17th century.   His father had been a famous Pierrot in his time – a character who is the inspiration for the idea of the sad clown.   And this is where the story gets even more interesting, as much of the film takes us into Barry’s classes, where he is teaching young actors and dancers not only that soft shoe shuffle and other song and dance techniques but what some may think is the long dead commedia.   But it’s not dead, as Barry demonstrates.

Commedia is at the root of comedy technique.  You see it in the work of Charlie Chaplin and Laurel and Hardy through to Carol Channing and Lucille Ball.  It was commedia techniques that director Nicholas Hytner and actor James Cordern used in the National Theatre hit comedy One Man, Two Guvnors and it is behind the physical comedy of many tv sitcoms.  It’s the opposite approach to the famous “Method” used by actors such as Marlon Brando, in that rather than delving into the inner emotions. it is working from the outside in, using the physical characteristics to create the emotional effect.

There is also some delightful animation in the film illustrating the Commedia characters.  And you will find out the origins of “slapstick”.

Director Audrey Rumsby’s film should be seen by anyone studying drama or indeed anyone even remotely interested in the history of entertainment.   But it’s not a hard study. It is entertainment itself.   87 minutes of fun, laughter and the living history of showbiz.