Leaving her late father’s ship which she now captains, Alice is taken back to Wonderland. She goes through a large mirror – following Absolem a butterfly, who used to be a caterpillar (voiced by the late Alan Rickman) – at the home of the man she has refused to marry.

She arrives at a tea party where she meets up with….yes, the Cheshire Cat (Stephen Fry), the White Rabbit (Michael Sheen), the Dormouse (Barbara Windsor) and Tweedledee and Tweedeldum (Matt Lucas). Alice’s friends explain the absence of the Mad Hatter (Johnny Depp) who has retreated to his home and is wallowing in depression over the death of his whole family. Alice realises that she needs to go back in time to save the Mad Hatter’s family. She also encounters the rather nasty Red Queen (Helena Bonham Carter) who has her own unresolved issues with her sister the White Queen (Anne Hathaway).

Alice discovers a strange clock-like figure called Time (Sacha Baron Cohen) who is in charge of a Chromosphere which controls time. She steals it in order to manipulate time and save the Hatter’s family and sort out the past troubles between the two Queens.

Mia Wasikowska is a sweet Alice who is able to show determination when solving problems. She is unafraid of venturing into the unknown. It is good to have a likeness between Alice and her mother, played by Lyndsay Duncan. Johnny Depp seems to enjoy disguising himself under lots of make-up and he has piles of it on here, but the characterisation is a million times better than his Pirate! A newcomer to the Alice films is Sacha Baron Cohen who, apart from his somewhat strange Germanic accent, puts in a brave performance as Time – he manages, of course, to get laughs on lot of his lines.

And Alan Rickman and Stephen Fry have their own special voices to contribute – each sounds exactly as you feel they should – Fry as the Cheshire Cat and Rickman (alas, now sorely gone from us) as Absolem. For me, however, the star of the film – as in Alice in Wonderland – is Helena Bonham Carter: with her very large head and extraordinary make-up, you will find that whenever she is on screen, you can’t take your eyes off her.

Although this has a different director, Tim Burton remains as producer and you can see his touch throughout. This is a film which is bright to look at, lively and lots of fun. It is not to be taken seriously or looked on as an exact representation of any of Lewis Carroll’s books, but there to be enjoyed by the whole family. 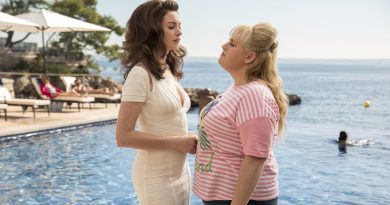