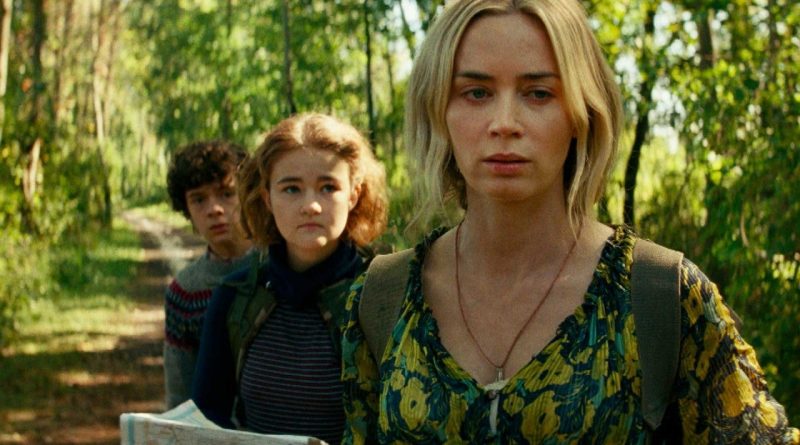 One of the master strokes of John Krasinski’s original A Quiet Place was to make the threat – the aliens that dine on humans – blind, so they could only find their prey by sound.  And the second was to make one of the main characters deaf, so everyone in the family had learned signing and could communicate that way silently.

A Quiet Place Part II is not quite as quiet.    Krasinksi, who also played the father of the Abbott family, was devoured by one of the creatures at the end of QP1 while defending his children.  In QP2 the family find another protector in the form of former neighbour Emmett (Cillian Murphy), who is a bit of a shattered wreck, when Evelyn (Emily Blunt), her two children and the baby first meet him.  He soon though becomes protector and co-warrior to Regan (Millicent Simmonds), who is the hearing impaired daughter, when he accompanies her on a hunt to find survivors.

Because Emmett doesn’t sign, there’s more dialogue in this one, whereas apart from sound effects, QP1 was almost a silent movie.  There’s a delightful moment early in Emmet’s  relationship with Regan, when he’s trying to communicate with her and she tells him firmly to “Enunciate”.  He’s much easier to hear after that.  Mumbling actors in other films please take note!

In QPI we never saw the actual alien invasion   Here it provides the very effective opening sequence, which moves swiftly and effectively from just another peaceful small town day playing baseball to terrifying and frantic total mayhem, panic and massacre with lots of noise, in sharp contrast to the rest of the film.  It’s also the only sequence in which Krasinksi appears as paterfamilias Lee Abbott, having effectively already written himself out of any sequel.  It’s probably no coincidence though that Murphy is at first almost unrecognisable behind a beard, which gives him a strong resemblance to Krasinki’s character as the father.

After that opening, the story returns to where we left the now widowed Evelyn and her children at the end of the first film, escaping from their home, which has been invaded by the creatures and setting off to find another, safer hiding place.

The children look a lot older than they did in QPI but we have to bear with that, as it’s two years since the last film was made and teenagers do grow.  But Simmonds and Noah Jupe as her brother Marcus are too good to consider recasting, particularly Simmonds, who carries even more of the action this time.

Continuity with the first film is well observed, such as Evelyn’s ingenious arrangement for keeping her new born baby silent in a closed box with an oxygen mask.  Then there’s the hearing aid Dad made for his daughter, which proves a useful weapon against the creatures.   Even small, never referred to details such as Blunt’s injured foot are remembered.  The new film stands up perfectly in its own, though if you remember the first one, so much the better.

This is sci fi horror but it’s very grown up sci fi horror.  The special effects are good – we see just enough of the creatures and get horrifying glimpses of their half eaten prey but not so much that we can guess the technology.

The reason though that the film scores so highly is because we care about the characters.  Poor Evelyn who suffers nobly in her defence of her children, Emmett, who like the cowardly lion finds his courage and particularly Simmonds and Jupe as the children.   There’s a particularly masterly piece of editing in one long sequence, where Krasinski intercuts between three separate, threatening situations the characters are in, which ramps up the tension almost unbearably.