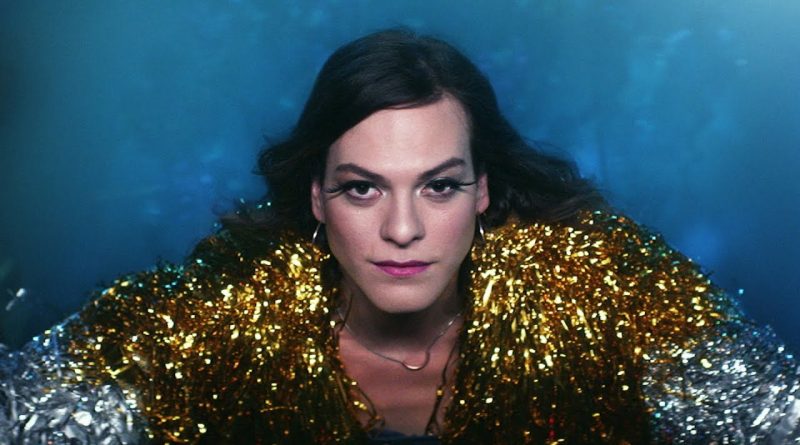 Set in the Chilean capital of Santiago, this is the story of Marina (Daniela Vega), a young transgender woman.   When we first meet her she happy, working as a waitress and a singer in a club and in a loving relationship with her fiancé, Orlando ((Francisco Reyes), a handsome, divorced and much older man in his fifties.  But then Orlando dies suddenly of a stroke and Marina’s life changes.

Because of her sexuality, she is denied the respect and sympathy due to her as the departed’s fiancée.  The police, who insist on calling her “he” because her identity papers still categorise her as male, perceive her as a prostitute and treat her with suspicion because of bruises on Orlando’s body, sustained in a fall when he is taken ill.  Conversely the brusque sexual offences officer (Amparo Noguera) contemptuously assumes Orlando might have been abusing her and subjects her to a humiliating medical examination.

Worse, Orlando’s ex-wife Sonia (Aline Küppenheim) and son Bruno (Nicolás Saavedra) make no secret of their hostility.   They exclude her from the mourning process, insult her as a freak of nature, evict her from the flat the couple shared and even confiscate her beloved dog.  The only ones to show her any sympathy is Orlando’s brother Gabo (Luis Gnecco) and her fatherly singing coach (Sergio Hernandez), who encourages her operatic talent.  But without Orland’s love and protection she is subject to society’s conformity and cruel assumptions about someone, who is perceived as different.

The film is particularly timely in view of the current interest that is being shown in transgender issues.   It is not though merely a political statement but also a good and often moving story.   Vega is excellent in the role, giving us the audience a good insight into what it means to be transgender.  Lelio wrote the role with Vega in mind and she is perfect in it, taking us with her every step of the way, as despite her trials, she maintains her own integrity and dignity.

As they dine together, dance together and make love Marina and Orlando come over in the opening scenes as a convincingly loving couple, making what happens to her afterwards doubly upsetting and moving.  The physical and mental abuse she endures at the hands of Orlando’s family and the attitude of the police and the doctor is shocking.  They all show a remarkable, almost unbelievable degree of lack of compassion.

This is a thought provoking, engrossing and unusual film with a strong, empathetic and unusual heroine, which invites us examine our own attitudes to people in Marina’s situation.  It may be set in Chile but its theme of intolerance of someone who does not confirm to society’s norm is universal.