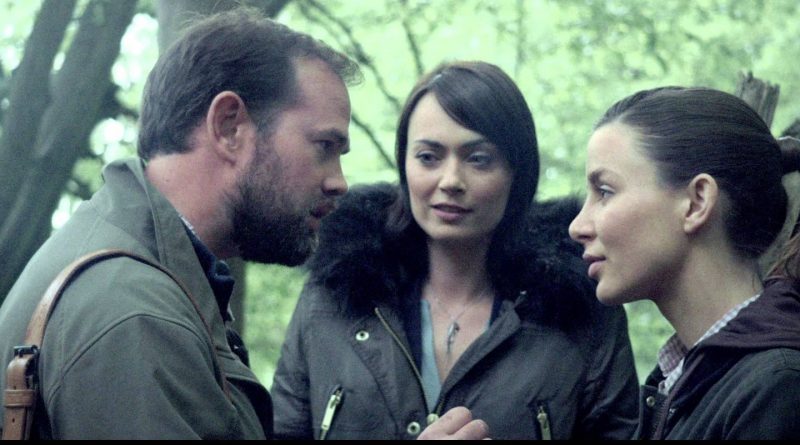 In the summer of 1916, The Battle of The Somme became one of the bloodiest battles in history, wounding and killing over a million soldiers. Marking the 100 year anniversary a documentary crew led by filmmaker Marcus Singh (Panthaki) and Emma Washington (Glenn) sets out to the site to uncover its still-hidden mysteries. World War Dead: Rise of the Fallen is a complex of their footage.

This is by far not the first “found footage” movie, it is however one of the more disorientating. It starts with plenty of arguments by the film crew which become dull and tiresome after a few minutes. As they (at last) find the site of the battle and enter Devil Woods, things get a little more mysterious. The legend goes that a regiment of German soldiers was cursed in Devil Woods by a tortured British soldier and as a result, became the fallen army and rise again as zombies. As these zombies make their presence known through a few camera glitches, you wonder was there something there or not. As the film continues the camera crew are left fighting for their lives.

When you think “found footage” horror flicks you expect some unsteady camera angles and framing, but here things become so unstable it is barely watchable. Camera glitches flash in and out far too often that at times a single image cannot even be decoded. If there had been more visuals of the zombie action, scenes a viewer could actually see and make out a full picture, then the movie would have been far more entertaining and less distracting.

You would expect blood, guts and lots of zombie biting when referring to a zombie horror flick. However, there is a complete lack of this here; and what can be seen lacks imagination and creativity. Limbs are pulled off a zombie, which being undead isn’t as shocking as you’d expect while zombie growls off screen do not fill a viewer with suspense or send a shiver down the spine.

Will this movie keep you on the edge of your seat? No it will not. Will it have you sneering away from the screen when things get bloody? It’ll more likely have you feeling sick from the camera moves. There’s nothing that will have you sitting with attention wanting to find out what will happen next.

Special features include a behind the scenes featurette and deleted scene but after sitting through the film for 77 minutes, watching the bonus features may be the last thing on your mind.

World War Dead: Rise of the Fallen is released on Blu-ray and DVD on 04 May.