Not being an expert on the history of India and what led up to partition in 1947, it is difficult for me to comment on the accuracy or otherwise of the events depicted in this film.

There are a number of known historical figutres includingthe new and final Viceroy, Lord Louis Mountbatten (Hugh Bonneville) and his wife, Edwina Mountabatten (Gillian Anderson), and 18-year-old Pamela (Lily Travers), alongside the famous Indian charcters including Nehru (Tanveer Ghani) and Cyril Radcliffe (Simon Callow), who has to draw the map of the new divided India/Pakistan.

In the Viceroy’s huge palace in Delhi, the 500 servants bustle about fulfilling all the needs of the people they serve upstairs. Amongst the staff is the newly arrived Jeet (Manish Dayal), a Hindu, who has already met and fallen in love with Aalia (Huma Quereshi) a Muslim girl who looks after her blind father, Ali Rahim Moor (another gentle performance by Om Puri who sadly died in January 2017).

The stories of upstairs and downstairs, as it were, play alongside each other, while trouble breaks out all around the Viceroy who discovers that Churchill is behind the order to form the Muslim state of Pakistan. Unfortunately as the Viceroy sets about arranaging just this, he comes to realise that it will mean displacing 14 milion people. The devastationg effect of partition brings nothing but unhappines to Muslims And Hindus alike and Mountbatten and his family feel the effect. Although they say they will stay in India, in fact they leave.

Hugh Bonnmeville is almost too nice as Mountbatten and gives us a decent family man who strives to do his best with partition. Gillian Anderson, with a cut-glass accent, portrays Lady Mountbatten as someone who seems to understand the Indian pople and wants to show them she is on their side. There are charmimg porttraits from Huma Quereshi and Manish Dayal as the young Indian lovers torn apart in the carnage. It is so sad to see Om Puri giving his final film appearance. He was, indeed, a fine actor. At least you can catch him here in a film which gives a particular view of the times of partition. The movie is well-made and has great photography It is Director Chadha’s interpertation and not necessarily always historically correct.

The Home Entertainment version comes with extras inncluding : the Making of Viceroy’s House; the Personal Story of Gurinder Chadha. 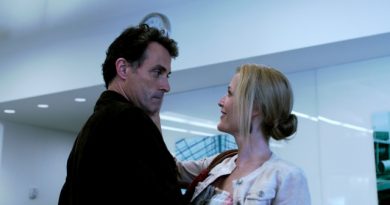