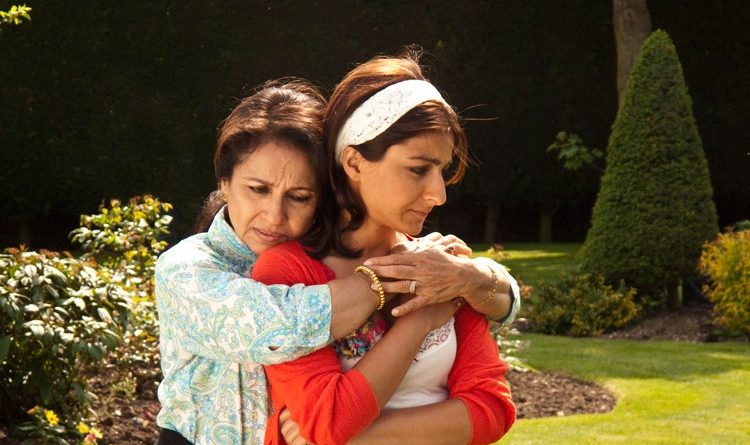 Life Goes On examines the emotional roller coaster that a family goes through as they come to terms with the death of a loved one.

Director Datta evokes the film’s London setting from the very opening with shots of Big Ben, the Eye and at ground level a colourful summer festival with the camera climbing over Bengali dancers performing on the streets of the capital. Despite this upbeat opening though the subject of this movie is grief and how a family – husband and three daughters – deal with the loss of their wife/mother.

The family in this case is a modern Indian-Bengali doctor’s family. The film explores what happens immediately after the mother’s death over the six-day span until the funeral with prayers and a gathering and attempts to answer the questions of how does a family move on from the unexpected death of a loved one and the feelings of emptiness that engenders.

The sudden death of Manju (Sharmila Tagore) forces Sanjay (Girish Karnad) into rediscovering his relationship with his daughters and their lives. Grappling with his devastating loss and missing the mediating influence of his wife, Sanjay faces a new crisis in accepting the modern lives his daughters lead. The film explores the different worlds at play within this one family with stereotypical representations thrown out of the window. One daughter is a lesbian, another is married to a British man with two small children and going through marital problems while the youngest Dia (Soha Ali Khan) is an unmarried pregnant drama student in love with a Muslim boy (Rez Kempton). The story demonstrates how times have changed and how preconceptions from the parents surrounding issues, such as sexual orientation, pregnancy before marriage and Hindu/Muslim relationships, are filtered through to their children but how the daughters ultimately make their own decisions in life. By the end of Life Goes On there has been a gelling of a family, the building of a unity that wasn’t there before and an understanding of each individual character’s personal as well as cultural beliefs. As Sanjay recollects his own childhood and the trauma of Hindu Muslim riots during partition of Bengal, he comes to a reconciliation with his family as he realises that nothing is perfect.

The emotional power of the individual scenes varies.  Sometimes there is a great sense of sincerity, such as the look of a face peering out into the wide world wondering what to do next. At other times however, there is a lack of emotion, such as when a woman is told her mother is in the hospital. The inclusion of visions by the family of all the things they recall their mother/wife doing throughout her lifetime, such as watering plants and the discussions they all took part in, add to the emotional roller coaster of feelings the family is going through.

Life Goes On is something different and will not be to the liking of everyone, but despite the specific cultural ethnicity of the setting, the characters and story have a universality to which many individuals will relate.