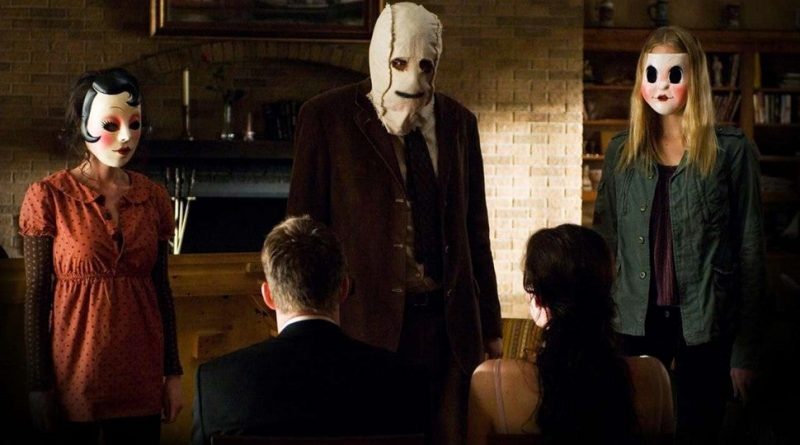 The best home invasion film of the noughties is out now on a Limited Edition Blu-ray. It’s time to think again about what makes The Strangers so good. There are lessons to be learned.

Kristen (Tyler) and James (Speedman) turn up at his parent’s empty house after a friend’s wedding. The evening has died horribly: James proposed to Kristen and she said she needed more time to think about it. The house has been decorated as if her ‘yes’ was a foregone conclusion. Ouch.

Kristen and James stay up late, sulking over what went wrong. Then there’s a knock at the front door. At 4am. A young woman, who stays in the shadows outside the door, asks: “Is Tamara there?”.

Soon, three masked people are attacking the house and terrorising the young couple.

My colleague had to stop watching The Strangers after 30 minutes as it was making her overly anxious. Which is a strange power for a film to have, when it includes lots of completely generic elements, for example masked intruders, cat and mouse games, percussive incidental music, a stuck record playing creepy country music.

Why, despite these elements, is the film so fearfully good?

Firstly, The Strangers does these elements very well. To give another example, a scream queen is an essential part of a horror film; and Liv Tyler is very good here, with just the right amount of resentment towards her boyfriend and fear and anger at what is being visited on them both.

But more importantly, Bertino has done some unusual technical things that work brilliantly and remain pretty unique 12 years on.

Bertino uses a stealthy pace throughout. There may be shock moments, but they steal up on you. The movie seems to move at the pace that the intruders slink around the house.

You tend to only see the strangers in shots with Kristen and James. Nothing they do in the first half of the movie is seen. It is just heard.

There are two correlations to this: the few POV shots of the strangers that can definitely be assigned to the couple have an iconic terror; and the film’s signature, relatively still, widescreen shots that give a “proscenium” look to proceedings. Most notably in a shot in which the hooded intruder glides into the background while Kristen is smoking anxiously in the furniture-cluttered foreground.

These still, widescreen shots detach the viewer from proceedings at the same time as they crank up the tension. Which seems paradoxical. How does this work?

Widescreen shots tend to dissipate an audience’s focus (where do you look?). This can give a calming or epic feeling to proceedings. But if you fill the frame with “stuff” and then suggest to an audience that that stuff is potentially malevolent (where is the threat coming from?) you will make them feel very anxious indeed.

That’s why the proscenium shot with the intruder in the background is one of the key horror movie shots of recent times. Before this happens, our anxiety is inchoate, the threat could be anywhere. The intruder’s glide in the background focuses our anxieties – we now know what to fear and where to look for it.

The power and importance of Bertino’s move cannot be overemphasised. Once you have seen it, you will groan and roll your eyes every time a horror film uses flitting shadows in front of the camera, or tracking shots down an empty corridor.

Use slow glides and lots of stuff, every time.

This Limited Edition Box Set of only 3,000. It includes a soft cover book with new essays by Anton Bitel and Mary Beth McAndrews plus stills and behind-the-scenes images. There’s also a rather anti-social poster with new artwork.

Extras on the Blu-ray include new interviews with writer-director Bertino, cast and crew.

The Strangers Limited Edition Blu-ray is out on 28 September 2020.