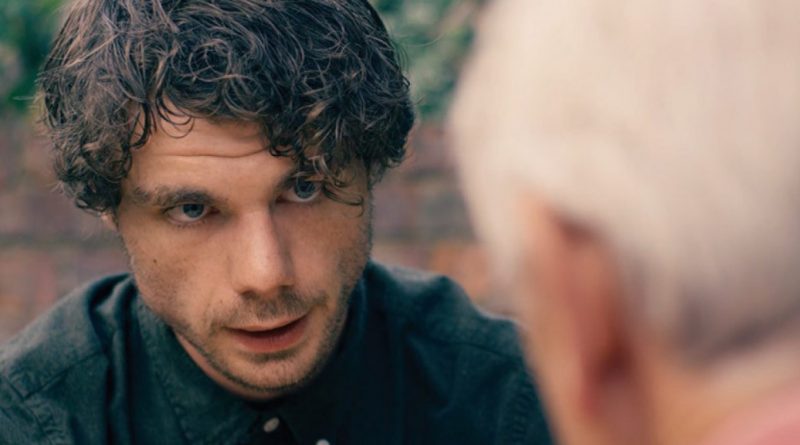 Dir. Benjamin Cleary, UK and Ireland, 2015, 13 mins
Cast: Matthew Needham, Chloe Pirrie
Stutterer is a film about a young man with a stammer, a speech impediment which, in less politically correct times, has been the object of humour for some, but it is certainly not funny for its many sufferers.

At only 13 minutes long (It’s not a typo – 13 minutes – not 130 minutes!) some may well be surprised to learn that this British production is Oscar nominated. You will need to look a long way down the 2016 88th Academy Award nomination list, way past such films as The Revenant, Carol, or Bridge of Spies – past even the category for Achievement in Makeup and Hairstyling, in order to find the five nominations for Live Action Short Films, of which Stutterer is one.

According to the British Stammering Association “stammering is typically recognised by a tense struggle to get words out” which commonly “involves repeating or prolonging sounds or words, or getting stuck without any sound.” The Association points out that “stammering varies tremendously from person to person and is highly variable for the person who stammers who may be fluent one minute and struggling to speak the next.”

Matthew Needham (Casualty, Sherlock), plays Greenwood, the “stutterer”, who suffers a profound and crippling stammer, but who has an “inner voice” which is both eloquent and witty.

Every night, often for hours at a time, he exchanges messages through online social networking with Ellie (Chloe Pirrie – The Game). On the eve of their six-month anniversary, Ellie messages Greenwood with the surprise news that she has travelled all the way to London for a few days, and asks him if he would he like to take things “offline” and meet in person for the first time. For a stammerer who lives and works alone and who sees himself as being “invisible to the naked eye”, excelling “in the art of self-pity” and having “nil communication skills”, finally meeting face-to-face with Ellie is a really daunting proposition with everything at stake.

Stutterer is the brainchild of three filmmakers, writer/director Benjamin Cleary, producer Shan Christopher Ogilvie and producer Serena Armitage. It is, surprisingly, the first film that Benjamin Clearly has directed (so defintely here is up-and-coming talent to watch), and it is directed from the heart as both Cleary’s father and brother suffered from stammering whilst growing up.

The film was made on shoestring budget of just five thousand pounds, the director rented his room for two months and slept on a friends couch, so every penny could be put into making the film.

The film begins with a problem which most of us have experienced in this digital age – phoning “customer service” of a large corporation – with interminable waiting on the phone – and then, finally, you get to say your piece. This, whilst frustrating, is not a problem for most of us – but if you have a severe stammer…..

So, here I am reviewing a film which deals with a “disability” from which I have the good fortune not to suffer. But what if I did? Would my view be different? So I asked a “stutterer”, Anthony Davis, for his opinion.

Davis, who is in his forties, has stammered since about the age of 7. He said that he found the film a “quite a convincing, yet poetic, portrayal of what a stammerer behaves like.” The reality, Davis says, is that a chronic stammer is a problem that cannot be hidden, nor disguised, nor avoided, no matter how apt the stammerer has become in doing so. Although modern technology seems to lend itself very well for this purpose, the text, the e-mail, social media, even internet dating are all virtual precursors to the inevitable crunch when the real world comes to the surface again and people have to be dealt with directly – in what ought to be the most effective way. We all need or want to socially interact but doing so in a direct way for a stammerer has the ‘risk’, and, therefore, subconscious fear of being ‘found out’.

Davis, of course, gets to the real nub when he points out that “to somehow be perceived as mentally slow, or hesitant in thought and therefore stupid becomes the ultimate taboo, and therefore to uncontrollably stammer is a betrayal of dignity and the true self.” This, he says is because the instinctive perception of translation of thought into speech, should match and reflect the clarity, speed, and complexity of the underlying thinking, but in some people it doesn’t follow the normal pathway with the thought being fluent, but the translation of thought to audible speech being impaired. So the stammerer becomes reluctant to say anything until they think it can be said fluently, leading to great bouts of silence and avoiding speaking situations until the comfort zone is very small indeed, perpetuating the problem.

(Warning Spoiler – difficult to avoid being such a short film!) Greenwood was shown learning sign language but Davis has a problem with this. As he says, “Nobody wants to be perceived as deaf as well as not able to talk properly.” Interestingly, however, Davis has met someone who chose to learn sign language as a consequence of their stammer, as a preferred pathway within her chosen profession. She wanted to be a teacher of small children, a very rewarding and enjoyable career. However, she was all too well aware that small children would pick up on her stammer, so chose to teach deaf children instead – an even more rewarding experience without the distraction of the stammer.

It is interesting that the only other film I can think of to deal deeply, or, indeed, at all, with the subject of stammering, The King’s Speech, was also Oscar nominated and a multi Oscar winner (2011 Academy Awards). However, as much as one could empathise with George VI’s struggles to overcome his impediment, one must feel a closer affinity with Greenwood, a rather more ordinary citizen and stammerer, even if the film’s 13 minutes is only a fraction of the running time of The King’s Speech.

This is a great little indie short which I certainly hope comes home with the Oscar.
Review by Eric Jukes with Anthony Davis