I believe that we are witnessing the start of a long-term career for young Charlie Plummer. In Lean on Pete Charlie plays 15-year-old Charley who lives with his single father, Ray (Travis Fimmel). Charley must keep moving as his father changes location and girlfriends. One of these girlfriends causes so much trouble that Charley’s dad suffers terribly.

Charley (lying about his age) manages to get a job in stables run by the trainer, Del (Steve Buscemi). Charley grows fond of a horse called ‘Lean on Pete.’ While Del offers advice on horses, he doesn’t reveal his full character or explain to Charley how he slaughters horses. When he learns that his favourite horse is destined for the slaughterhouse, Charley steals away with the horse. The boy’s aim is to reach his favourite aunt, but his journey doesn’t go smoothly.

Director Andrew Haigh has adapted the novel by Willy Vlautin to tell a special coming of age story. Charley meets various people both in the stables and on his journey. Chief amongst these is Bonnie (Chloe Sevigny), a jockey who befriends the young boy. And, of course, Del, who is given a complete rounded out characterisation by Steve Buscemi who shows both the sleezy side as well as the carer and mentor to Charley.

The main character is Charley who, as depicted by Charlie Plummer, is a somewhat sad, lonely boy who in seeking for his own family, is drawn to a horse who he sees as his true friend. This is a superb performance and young Plummer is certainly one to look out for in the future.

With great photography, it’s a tale of a horse and a boy, but it is most unusual in both the telling and characters. 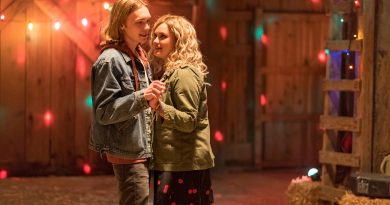