Like “6 Below” last week this is another of those true life stories of human endurance in solitude against the challenges of nature, where the viewer feels as though they have lived through every exhausting experience with the protagonist.  This time though it is set in the tropical heat and humidity of the Amazonian jungle.

The hero is Yossi Ghinsberg, played by Daniel Radcliffe with an unnecessary Israeli accent, which tends to come and go somewhat erratically.  In 1981 after finishing military service, Yossie sets off backpacking alone to explore the Amazon.  In Peru he meets two other young adventurers, Marcus (Jackson) from Switzerland and American Kevin (Russell).  He also stumbles across charismatic Austrian Karl (Kretschmann), a dodgy looking character, who convinces Yossi that he can take him into the real jungle, before it is ruined by civilisation – uncharted territory where a lost tribe of Indians can be found.  Swallowing this whole, Yossi persuades his two friends to join him and the four of them set off into the jungle.

Predictably things go wrong.  Marcus, who is not as robust as the others, can’t keep up, so he and Karl turn back to go for help, while Yossi and Kevin press on down the river in a homemade raft.  Caught out by the rapids, they get separated, leaving Yossi by himself in the jungle to battle alone with nature – and handing the film over to Radcliffe for a solo performance.

Nature comes out best in this film.  The jungle itself, the mountains in the distance, the river and the sky are truly beautiful as seen through cinematographer Stefan Duscio’s lens.  Disappointingly we don’t see a lot of the wildlife however – just the odd bird, snake or monkey and a glimpse of a jaguar in the bushes, who has his eye on Yossi as potential dinner.  One would have welcomed the reassuring and informative voice of David Attenborough to lead us through this beautiful but hostile land.

Because frankly the characters don’t do it for us.  They are not very interesting, in fact somewhat dull and also annoyingly naive.  Despite the captions at the end of the film telling us what real life Yossi and Kevin have achieved later as adults in terms of conservation work and such, in the movie they come over as pretty green and foolish, both in terms of embarking on such a dangerous journey with so little experience and training and doing so with an unqualified guide, who is so obviously a fantasist if not a con man.  So the scenes of the four of them in the early part of the jungle expedition are more than somewhat flat, although the sequence of Yossi and Kevin fighting the rapids has a certain amount of nail biting excitement.

For the second half of the film it is Yossi on his own fighting to survive.  Radcliffe has made some interesting choices in his efforts to break away from his Harry Potter role.  This certainly must have been the most physically challenging and uncomfortable, as he battles with the elements, nearly drowning in mud and suffering from what looks like a bad case of trench foot.  Perhaps the most graphic is when he digs an invading parasite out of his forehead with a pair of tweezers.  Ugh!  For visual relief the director gives us flashbacks to Yossi’s family and his delusions and dreams but while we feel sympathy for the actor as much as the character, we are as relieved as Yossi when his ordeal is finally over. 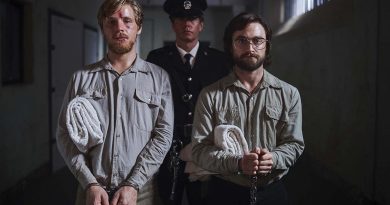