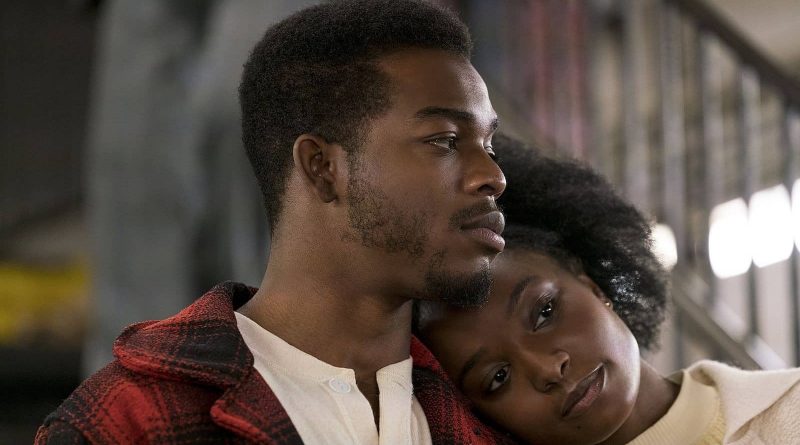 Barry Jenkins, writer/director of the Oscar winning Moonlight, has based his latest film on a novel by eminent black American author James Baldwin.

The title refers to the street where Louis Armstrong was born in the black district of New Orleans.  But the point of New Yorker Baldwin’s title is that “Every black person born in America was born on Beale Street, born in the black neighborhood of some American city, whether in Jackson, Mississippi, or in Harlem, New York. Beale Street is our legacy.”

But although this story is indeed about the black experience, Jenkins’ film also has a universality which will appeal across the board.

Set in early 70s Harlem, the central characters are young lovers Tish Rivers (KiKi Layne) and her fiancé Fonny (Stephan James).  We first meet them as a happy couple holding hands as they gaze over the Hudson river in the sunshine.  Then shockingly we find Tish visiting Fonny in jail, where he is being held, we later learn, for the rape of a young Puerto Rican woman – a crime he did not commit. But the victim has fled and the principal witness is a white police officer, who has a grudge against Fonny. The only witness for the defence is Fonny’s friend Daniel (Brian Tyree Henry), who is recently out of jail on what was probably also a trumped up charge and therefore regarded by the system as an unreliable witness.

Through flashback we learn the story of the young couple’s love affair and the racism that has led to Fonny’s plight.  This is not though a story of poverty in the ghetto.  These people and their families are respectable citizens with decent homes, who work hard for a living.  But they are black.

When Tish announces to her family that she is expecting Fonny’s child, her parents Joseph (Colman Domingo) and Sharon (Regina King) and her older sister Ernestine (Teyonah Parris) are supportive. But when they share the news with Fonny’s family, his aggressively religious mother (Aunjanue Ellis) in a brilliantly written scene illustrating her snobbery and a different sort of prejudice, condemns Tish as a whore and blames her for Fonny’s plight.

One of the many strengths of the film is the sensitive and beautiful performances of Layne and James as the young lovers.  They totally engage our empathy.   Another is that of King’s character, as the mother fighting to clear her future son-in-law’s name and for her beloved daughter’s happiness.  In another memorable sequence she travels to Puerto Rico to try to find and persuade the rape victim to return and clear Fonny’s name.  There is also a good supporting performance from Finn Wittrock as the liberal young white lawyer who is fighting against the odds to clear Fonny’s name.

The film doesn’t overstate its case with scene after scene of overt racist brutality, as some films have done in the past.  It does it just once in a restrained but very powerful sequence, when Fonny first falls foul of that cop (Ed Skrein).  But as the months turn into years, Fonny’s son is born and starts to grow, while his father is still in jail awaiting trial, we realise the implacable wall of societal prejudice that these characters are facing and the hopelessness of their case.   It is a very powerful statement.