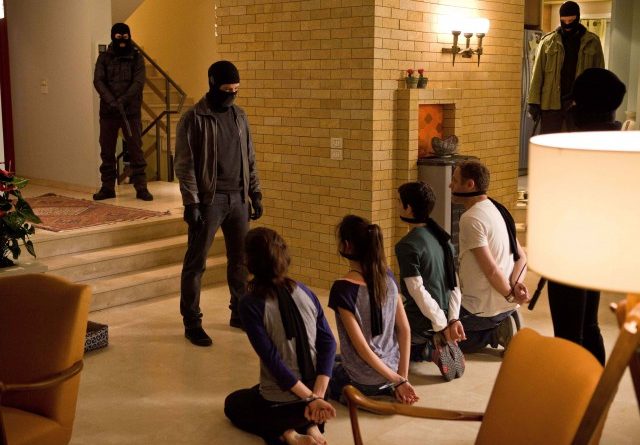 This ground breaking Israeli series about a family taken hostage follows all the psychological thriller truisms, but it is a thrill ride and an action-packed, suspenseful show with twists around every corner.

On location in today’s Jerusalem, a brilliant surgeon Dr. Yael Danon played by Ayelet Zurer is pre-selected to perform routine surgery on the prime minister. Four ex-soldiers decide that will be the opportune time for his departure from the earth, at the hands of Dr Danon. To ensure she complies, they hold her family hostage and ransom their lives for that of the prime minister’s. It is a question of morality: what would you do? What Dr Yael Danon does when faced with this decision swings in both directions: will she choose to sacrifice her family for the nation or bail on her loved ones and commit the ultimate sin. The choice is compelling.

Episode one moves with pace: the family are taken and the ultimatum delivered. What transpires over the ten episodes is a story with unoriginal components put together in a unique way.  Slow in places, with some story lines dragged over three episodes but this is perhaps unavoidable theme for a story which transpires over a matter of days. Like many thriller mysteries before it, like 24 or Breaking Bad, Hostages has all the suspense you need to drag out a drama over ten episodes and end with a bang. With every thriller series, characters are brought in and removed throughout to keep it fresh and exciting and Hostages follows suit. However the five minute on each side reminder of the previous episode and “what’s next” sequence turns each episode into 30 minute episodes as opposed to the 40 minute air time the series occupies.

The four family members and their four assailants are a match made in hell. Each Danon has a felonious partner in crime whom they either tolerate or hate. Yael is the central character of the family, alongside Rubin the head rogue criminal. With three love stories in the mix, including the parents, it makes for good TV ticking romance, sex, violence and crime boxes. For a show called Hostages, there is a lot of time spent frolicking all over the city .

The status of criminals and innocents remains undetermined at the end of season one. Don’t be surprised if you are batting for the alternative team you started out rooting for. The US adaptation shown on Channel 4 in 2014 got great reviews – and so did this, the original source series which has just finished airing on BBC4.

Hostages: Season One is out on DVD and digital download on 16 March. Buy from Amazon