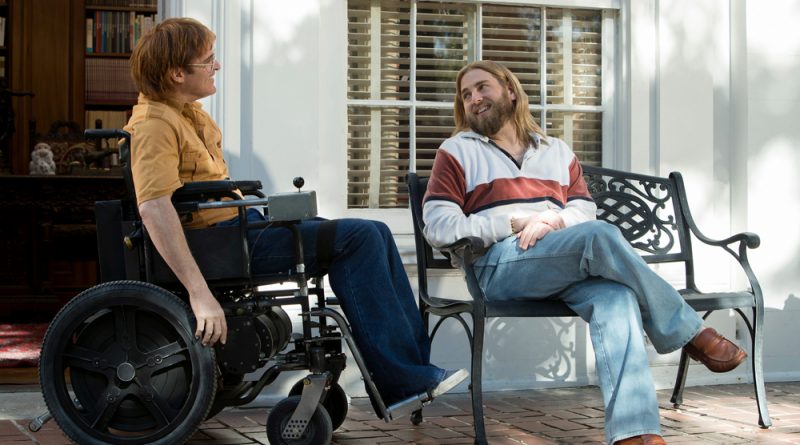 This is the much used genre of the true life story of one man’s redemption but in Gus van Sant’s film, it’s well told in a brisk and original style and flavoured with ironic humour.

Set in the seventies, the protagonist is John Callahan (Joaquin Phoenix) a boozer and a slacker who after a terrible car accident is left a wheelchair bound quadriplegic at the age of 21.  In the course of his tortuous recovery from alcoholism and learning to live with his disability he discovers a talent for creating darkly comic cartoons, which develop a national following.

The title of the film comes from the punchline of one of these, which shows a cowboy posse beside an empty wheelchair in a desert.  The use of these cartoons, which were frequently criticized in the day as being offensive, give the film an extra visual dimension and edge, right from the engaging opening titles and we enjoy their dark humour as it relates to the main character.

The telling of the story moves around the timeline of John’s life, intercutting scenes of him before the accident with those of him after.   But it is always clear where we are and the technique gives the storytelling an effective dramatic irony.   The is particularly effective in a sequence around the actual accident.  We’ve already seen its effects earlier – the wrecked car, John helpless in hospital and in his wheelchair.  So when we see what builds up to the crash – John getting drunk with fellow boozer Dexter (Jack Black in a nice cameo performance of an irresponsible idiot) and then allowing Dexter to drive his car, the tension is almost unbearable.  We are dreading the accident that we know is going to happen because we’ve already seen it and its consequences.

Phoenix is good as John.   He gives the character a sense of danger and evokes our sympathy for his physical situation, even though he is often unlikeable.  He can be arrogant, overbearing and violent.   John was adopted as a baby and his self pitying obsession over the mother who gave him away does sometimes border on overkill and simplistic psychology – we hear little acknowledgement of the adoptive parents who brought him up –  but it’s not unconvincing.

A more serious weakness of the film is its love interest Annu, played by Rooney Mara in a very sketchy role.   After a brief early encounter with John in hospital, she disappears from the film for ages and when she does return, their relationship is both abrupt and perfunctory in its execution.

Her sole function in the story is to persuade John to enter the addiction group where he finally conquers his alcoholism.   The group embraces the Alcoholics Anonymous philosophy, which anyone who’s ever been or known an alcoholic will probably recognise. John’s sponsor is Donny (Jonah Hill), a rich gay man with Jesus style flowing hair and beard and a fondness for kaftans, who patiently leads the group with “tough love”.  He looks like a retired and reclusive rock star, although we never discover his back story. The character though constantly intrigues. 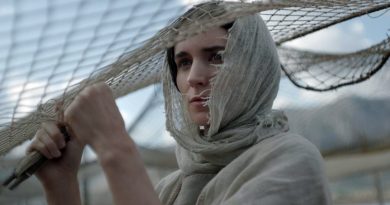 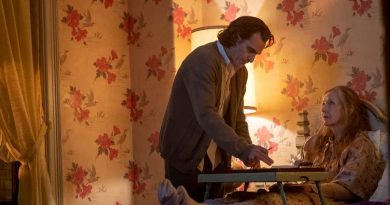