Death Walks on High Heels and Death Walks at Midnight premiere on Blu-ray in this beautifully restored, limited edition collection.

In Death Walks on High Heels, Parisian exotic dancer Nicole (Navarro), the daughter of a murdered jewel thief, (no-one said the films were going for either realism or credibility!) finds herself stalked by a balaclava-wearing assailant looking for a stash of diamonds.

Shacking up with an older man, eye-doctor Dr Matthews (Wolff), Nicole flees Paris for London (and a spot of shopping) before holing up in a villa on the Kent coast (Kent but looking nothing like it). But her troubles have only just begun …

Death Walks at Midnight is high-concept film at it’s trashy best, being a psychedelic Rear Window. Navarro stars as Valentina – a model who, in the midst of a hallucinogenic trip, witnesses a brutal murder in the apartment opposite hers. The drug must really be messing with her head because it turns out that the murder took place six months earlier!

After she goes to the police, the media exposure threatens her career; so Nicole sets out to solve the mystery with a little help from the sister of the victim (Lange).

Both films focus on their lead ‘woman in peril’ rather than over-indulging in the eroticised violence that’s characteristic of the genre. This is perhaps because director Ercoli focuses a kinder kino-eye on his wife, lead Nieves Navarro (working under the name Susan Scott). She is given screen time for some very empowered, gestural acting, especially in ‘Midnight’, that contrasts nicely with her iconic horrified, wide-eyed close-ups at key moments.

The scripts verge on the outrageous, with twists and turns that threaten to render plot redundant; but High Heel’s move from woman in peril film to whodunit is bold and quite a shock. There are sublimely bizarre elements in High Heels, such as the Italian perspective on English country types and the scene where Nicole seduces a smoking Matthews while eating fish with her fingers.

Both films look lovely thanks to cinematographer Fernando Arribas, being packed with richly coloured, well-composed shots; and with some deft nuances to the lighting.

There are enough winning 70s details of décor and dress to keep the most ardent retro-design fan happy. And the wonderful scores by Gianni Ferrio (Midnight) and Stelvio Cipriani (High Heels) are jazzy, sleazy-cheesy and superb; with Ferrio’s syncopated incidental music a far-out step beyond even these exceptional, emotionally-cored offerings.

Watch these – you will have fun.

· From Spain with Love – featurette comprising newly-edited archive footage of director Luciano Ercoli and actress Nieves Navarro, interviewed at their home in Barcelona

· Crime Does Pay – screenwriter Gastaldi reflects on his career in the crime film-writing business, including a look at Death Walks at Midnight 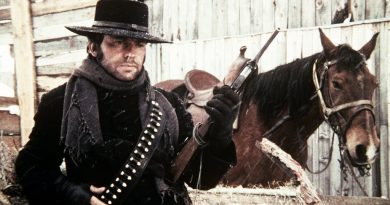