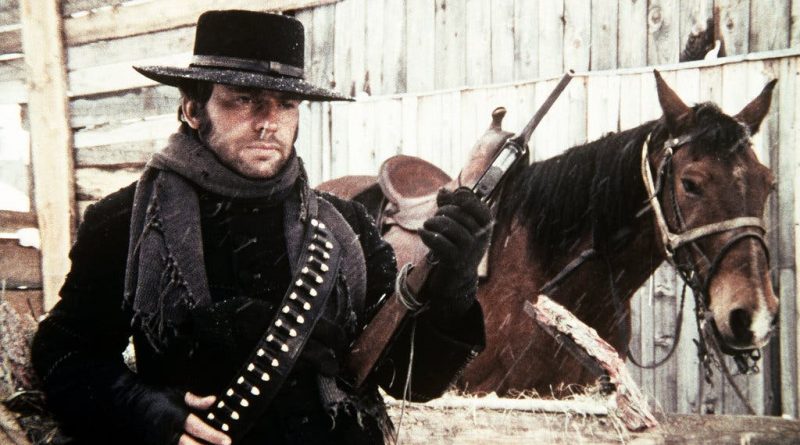 This bleak, snow-bound Western overcomes it’s rough and ready appearance to be a cathartic classic.

In remote, snowy Utah, a band of starving, ragged outlaws is waiting for the governor’s pardon.

Bounty hunter Tigrero (Kinski) knows his days of making money from legalised murder are numbered, so he sets about trapping and killing as many outlaws as possible, as fast as he can.

In the small town of Snow Hill, a young widow Pauline (McGee) hires the mute gunslinger Silence (Trintignant) to kill Tigrero and his bounty hunters.

Silence may get some help from the new Sherriff (Wolff). Or he may not. He is outnumbered and out-gunned, and this is not your normal, feel-good film.

The Great Silence has a big reputation in the UK, mostly because of filmmaker and TV presenter Alex Cox’s championing of it. Cox provides a good video extra on the film as well as a commentary. Another commentary option by Mike Siegel details technical aspects and is very enlightening.

This 2K restoration shows why The Great Silence is a great film and makes it look as good as it ever will, despite the issues arising from the difficult location shoot in the snow-bound Italian Dolomites.

The snow now looks great – deeply blue – and the furs many characters wear look burnished too. The low-lit interiors sometimes still bleed into the digital soup but on the whole, the film looks way more clear and distinct than the DVD version.

It’s fair to say the focus is soft throughout and there are still those weird patterns on outdoor shots in the early part of the film. Siegel thinks this was either a net they put on the camera to protect it from the cold or a protective oil that made the light refract in a patterned fashion.

Corbucci’s signature rough-and-ready, zoomed, close-up tracking shots are here; but there are also widescreen landscape shots as breathtaking as anything in the films of Sergio Leone or Anthony Mann.

The cast is great, with loads of faces familiar from Spaghetti westerns. They all play it low key. Kinski is all the better for keeping the snarling and eye rolling to a minimum, although there’s an important narrative point hanging off his staying cool. There’s a proper, protagonist’s role for Vonetta McGee as Pauline.

The Ennio Morricone score is lovely too, with a simple rhythm-driven intro leading to a lush orchestral theme, then later on some nicely done choral incidental music.

And then, of course, there’s that jaw-dropping ending. In a genre that makes much of the cynicism of its heroes, The Great Silence strikes a different note: resignation – and hope – in the face of ruthless and over-whelming power. Westerns never looked this Film Noir before or since.

The Great Silence is out on Blu-ray from Eureka! on 22 November