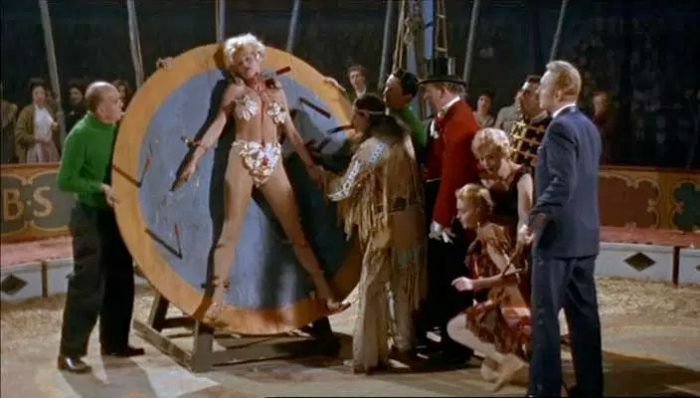 Daft and overblown, this film looks great in a 4K restoration. But it is so repressed, in such a dull, British way, that it is ultimately a bit of a letdown.

After an operation goes wrong, plastic surgeon Dr Rossiter (Diffring) goes on the run with his brother-and-sister assistants (Hylton, Griffith).

They end up in rural France, getting a drunk circus owner (Pleasance, with a suspiciously full head of hair) to sign his business over to Rossiter, who now takes on the name Schuler.

Schuler’s big if rather niche idea is to people his circus with beautiful female criminals. He’ll use surgery to change the way they look, then train them to be world-class acrobats, lion tamers etc.

One suspects this unlikely plot is a merely a ploy to display pneumatic young women in sequined decolletage and skin-tight leggings. But this being a British film at the tail end of the 1950s, the film fluffs this aspect too.

This was a period, remember, when you could only show “nudity” on stage in the form of tasselled peeps holding poses in a “tableau vivant” – you even see an example of this is the film.

So, in time-honoured exploitation cinema style, Circus of Horrors suggests more than it delivers. But it doesn’t really suggest enough.

The plot plods despite the premise. It needs more grand guignol. There’s not enough gore or glamour for a modern audience. Every element of exploitation cinema is reined in, restricted, repressed. Even, unfortunately, the script which definitely needs unleashing. As it is, stripped back to developing the stupid plot, it is charmless.

The acting is all good but frankly wasted in this subdued offering. No one is gurning, sweating, cackling or vamping anywhere near enough. Chew the fracking scenery, chaps! And the luscious female characters could really do more to embrace their inner evil. Their motivations are quotidian, when they are represented as more than beautiful victims.

On the plus side, there’s no denying Diffring looks good in jodphurs. And it is always nice to hear those cut-glass British accents that now sound like they are from another planet. On the minus side, there’s way too much footage of Billy Smart’s circus (ask grandad). There is also a man in a bear suit and a man in a gorilla suit.

It wants to be weird but doesn’t get beyond squeaky clean.