This is a semi-improvised comedy romance made under the direction of actress, comedy performer and now first time film maker Mercedes Grower supported by a large cast of actors, some of whom are familiar faces, others less known.

Part One deals with the breakup of several couples, part two shows us the moment when the romantic spark first ignited between them.   Telling a story in reverse for dramatic irony is no longer a new device. Harold Pinter did it masterfully with “Betrayal”, Gaspar Noé terrifyingly in “Irreversible” and the Williams Brothers most recently with the controversial tv serial “Rellik”.

The film was shot over something like four years on a low budget, which shows in the shooting and the overall lack of cohesion.  The result is a mixed bag of extended sketches, some played over several scenes, others just a simple duologue with some working very effectively, others not so well.  It is all set in London and uses familiar but appropriate locations, avoiding the obvious touristy ones.

It opens strongly with Elliot (Julian Barratt) confronting Ray (Oliver Maltman), with whom he has had a one night stand some time back in Barcelona.  He nobbles him at the stage door of the National Theatre, where presumably Ray is working and Eliot’s courting technique involves two melting ice cream cones used to great comic effect.  The comedy of actress Livy (Julia Davies) attempting infidelity to her older director lover Alan (Peter Wight) with a young actor is not so effective, apart from when the Livy attempts to show off her non existent singing skills.  One of the simplest and most effective sequences is the break up between Peter (Paul McGann) and the more mature Susan (Kate Hardie) on Hampstead Heath station, which is a perfect little one act play in its own right, while the most moving is Kerry Fox as an unhappy wife ignored by her partner (Roland Gift).  Some of the others however are less successful.

The “first spark of love” sequences in the second half don’t always match their fellow’s first half.   The somewhat inconsequential meeting of Fox and Gift appears to be in the recent past, which is odd, as in their break up scene they come over as a long married couple.  Livy trying to impress Alan at an informal audition with her knowledge of Shakespeare is a bit embarrassing, while Peter and Susan’s brief first meeting has little bearing on their parting.  The pairing of scenes which works best is between fashion industry high flyer Kate (Siobhan Hewlett) and builder Johnny (John Milroy).  Their break up is heavy with unspoken class conscious embarrassment, their meeting charming, flirtatious and sexy.

The film attempts a lyrical ending with Daniel (Noel Fielding) and his new love (Mercedes Grower).  After a somewhat baffling and noisy break up scene in the first half which is set largely in a public toilet and involves a football, we leave them poetically riding round the Queen’s ice rink on the ice making vehicle.

The film is very much good in parts and annoying in others.  And its parts fail to make an effective whole.  Despite some post production finance from the BFT lottery fund, the quality of the picture is variable and the budget obviously didn’t run to a good sound mix.  In some of the exteriors the dialogue appears to have been recorded on location against heavy background noise and is incomprehensible.

This is a valiant effort and not without interest but audiences overall may find it a difficult and sometimes irritating watch. 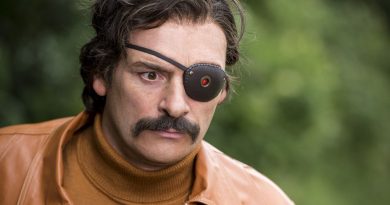