Fans of classic westerns shouldn’t miss the welcome return of Anthony Mann’s final outing with Jimmy Stewart – out now in splendid Technicolor and Cinemascope on dual-format DVD and Blu-ray.

Stewart plays it steely as Lockhart, an ex-cavalry officer investigating the death of his brother in an Indian ambush. The Indians were armed by someone – but who?

Lockhart rides into a town run by stern patriarch rancher Waggoman (Crisp); before falling for Waggoman’s niece, Barbara (O’Donnell). But Barbara has a beau already, Waggoman’s embittered ranch manager Hansbro (Kennedy) – a man who will do anything to keep Waggoman’s spoilt psycho son Dave (Nicol) from inheriting the farm when the old man dies.

Director Anthony Mann cut his teeth on film noirs and there’s a whodunnit element to the story as well as a tortured anti-hero (or two) driving the drama. Kennedy is every bit as enthralling to watch as Stewart – you could definitely make the case that he’s the focus of the emotional drama. As actors, Stewart and Kennedy are cut from the same cloth, both coming across as normal blokes; but Kennedy’s Hansbro has as much ambition as he has sympathy for those around him – that’s what makes him a tragic figure, a doomed Everyman to Lockhart’s single-minded revenger.

In fact, Stewart is here nowhere near as obsessive, pathological even, as the characters he plays in two of the other great Mann westerns: The Naked Spur and The Far Country. This allows Kennedy to steal some of the empathy with which we’d otherwise imbue Stewart.

But what makes this film a total delight is Mann and famous DoP Charles Lang’s signature approach to Cinemascope, widescreen composition. Many of the best images here are fluid and dynamic – very different from the monumentality you associate with other great westerns of the era such as Ford’s The Searchers.

The great scenes here – on the salt flats, the dusty corral fight and the high bluff sequences – are rich with movement as well as colour contrast between sandy browns and big-sky blues. Pans track background elements like a group of horsemen spreading out over the horizon line; while foreground elements such as nodding mules or wagon reins are cropped tightly in the same shot, developing in time as the background elements change. This gives a dynamic layering effect to many of the images – it’s a lovely, almost-abstract patterning.

The Man from Laramie is out now in a dual format edition from Eureka. 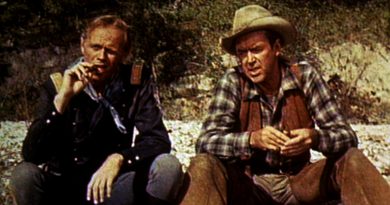