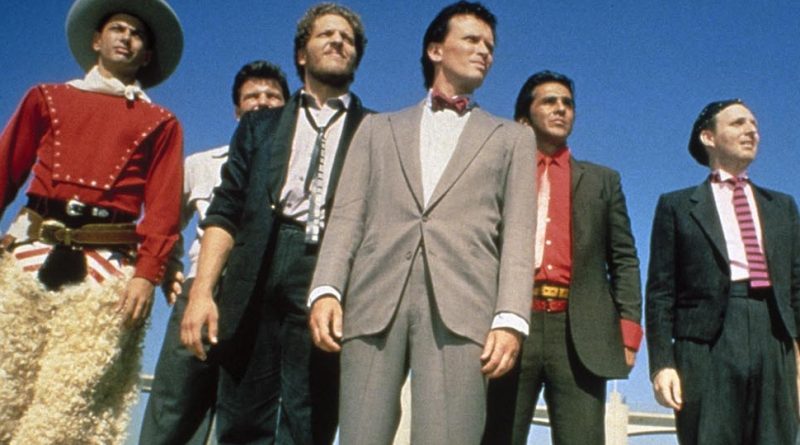 OK, let’s see if I’ve got this straight.  There’s this bloke called Buckaroo Banzai – so-called because he’s half-American and Half Japanese – and he’s testing his new jet-car in the Nevada desert – only he isn’t because it’s not really a jet car, it’s a machine for travelling through the space between atomic particles – the 8th dimension of the title.

Meanwhile an alien spaceship, which looks like an explosion in a Twiglet factory, is watching this from orbit. Later John Lithgow, playing a particularly unhinged cross between Doc Brown and Count Orlok, sees the news about the jet car on TV in his room at a mental institution (I think) and takes this as his cue to escape. Then Banzai and his entourage of cool dudes are playing a concert (because they are rock musicians as well as genius scientists, like that could happen) when they encounter a distressed woman with an uncanny similarity to someone in Buckaroo’s past…

Confused? Well – at this point I was debating with myself whether to start taking notes or give up on it, but I stuck with it and about halfway through it started to make some kind of sense, like a jigsaw when you find the last bit of edge.

I’d been curious about this film since the late 80s, my days of frequenting Star Trek conventions, when certain of my friends would disappear to a screening room whenever it happened to be playing. Any film with a title like this, I thought, had to be trying too hard. I preferred my science fiction with at least a veneer of respectability.

This one has method in its madness though. Despite its silly title it does have an intriguing concept at its heart – the idea that the space between atomic particles might be hiding something. That may have been the appeal to my 80s friends, or it may have been Ellen Barkin and her interesting skirt – I’m not sure whether it was strategically torn or just designed like that.

It’s a film you’ll probably either love or hate. If you’re thinking of buying it you probably already love it, but if you haven’t seen it your best chance of liking it is if you already have a fondness for irregular science fiction, or anything 80s that is unashamedly flamboyant, a bit ridiculous or just plain odd.

I’m still uncertain whether to love it or hate it, but it seems to have stuck in my head to the extent that I might actually go back to it and see if the bits that didn’t quite make sense on first viewing make sense on the second, so I suppose that’s a point in its favour. Having said that, if you can tell me what that watermelon is doing there – you’ll see what I mean – let me know.

The Adventures of Buckaroo Banzai Across the 8th Dimension is out now on Blu-ray.