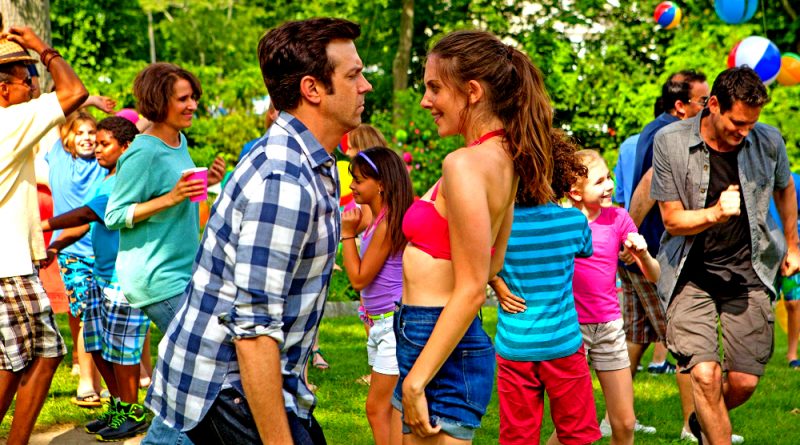 Director Leslye Headland, whose last effort Bachelorette played out like a highly cynical version of Bridesmaids, is back with her own 21st Century version of When Harry Met Sally.

Sleeping With Other People bears a lot of similarities to Rob Reiner’s late 80s classic romcom, and it’s not a bad thing. Not least the fact that the characters here are actually likable – which is something Headland forgot to include in the aforementioned Bachelorette (and a big part of the reason her second directorial outing is much more enjoyable than her first).

The story follows former college one-night-standers Jake (Sudeikis) and Lainey (Brie) who, years after losing their virginity to one another, reconnect at a Sex Addicts Anonymous meeting, of all places. Their renewed chemistry is obvious, but so is their respective emotional baggage – which leads to the pair agreeing to remain friends, with a safeword for when their sexual tension gets too intense. No prizes for which directions the story takes.

Yet where the plot lacks originality, it makes up for it with relatable, affable characters. Jake is an arsehole when it comes to women, but he knows it; he also knows the reason that he so quickly goes from woman to woman is that really he’s seeking ‘the one’. It doesn’t excuse his behaviour, but it explains it. He is an intensely likable guy, as Sudeikis is always wont to be – intelligent and quick-witted, and loyal to his friends (at least).

Lainey has been hung up on one unavailable man for ten years (Adam Scott, almost unrecognisable as uptight OBGYN Matthew), and is a victim of her own absurd certainty that this is the perfect man for her – a fact that she knows to be absurd. The best part about Headland’s characters here isn’t just that they are flawed (as all good characters should be), but the fact that they know their flaws, and are helpless before them. As in real life, it takes the actions of those closest to us to pull us out of our self-destructive doldrums.

Alison Brie continues to prove herself worthy of a position as a leading lady; she’s as funny as the rest of any cast she finds herself in, on top of somehow being adorable and sexy all at the same time. It’s presumably the combination of those big, doe eyes and that husky voice. Her Lainey is sympathetic to the point of men in the audience being able to relate to her personality quirks as much as women. Her chemistry with Sudeikis is great and she doesn’t run the risk of getting lost in his (unintentionally) overly-domineering, charismatic presence, as can happen with a lot of actresses paired with the man.

Although that initial plot – and the majority of trajectories it treads – are fairly rote, there are still surprises to be had in the way the film plays out. There are unexpected sidebars and time jumps, enough to keep jaded viewers interested enough as the ride goes on. Where the film does step into cliché from time to time, Headland throws us a new curveball with which to renew our attention (although they may not come quickly enough from time to time).

In regards to the film being a modern homage to Billy Crystal and Meg Ryan’s oft-mentioned/much-revered 1989 classic, there’s a lot of 2015 sensibility plugged into the film – be it Jake and Lainey’s MDMA-fuelled trip to a kid’s birthday party, which gets some of the biggest laughs of the whole movie, or Jake teaching Lainey how to orgasm via the example of an empty jam jar (this scene in particular feels like the Milennial’s version of “I’ll have what she’s having”.)

But the real similarity to When Harry Met Sally comes, obviously, in the form of two characters simply always being in the right place at the wrong time in regards to one another. It’s a story that works well because many people in real life have been through something similar – we all have our ones that got away.  Leslye Headland merely brings that story roaring into the 21st Century with all the wit and skill at her command. There is, unfortunately, something lost in the telling – a feeling that Jake and Laicey should realise so much earlier on that what’s best for them is right in front of them, and it’s that frustration that will perhaps stop some viewers from fully enjoying Sleeping With Other People.

It’s ultimately up to viewers to decide whether the two main characters’ emotional hang-ups adequately explain why they shouldn’t be together. At times it’s believable, and explains various personality tics and self-destructive moves on the part of these people, but at others it can’t help but feel like a reason for the film to extend itself to 101 minutes. Whatever the reason for the lagging plot, be it in-universe or otherwise, those who know what they’re going the cinema to see shouldn’t be disappointed. Namely, entertaining interaction between two romantic leads who have great chemistry, along with an extremely solid cast of supporting characters.

Speaking of supporting characters, it’s always a joy to see Jason Mantzoukas as the quirky best friend/business partner – ironically playing a serious version of a role he recently parodied in the underrated romcom spoof They Came Together. As far as I’m concerned, Mantzoukas is worth the price of admission in any film he’s in ever. The Legend of Krampus Featurette