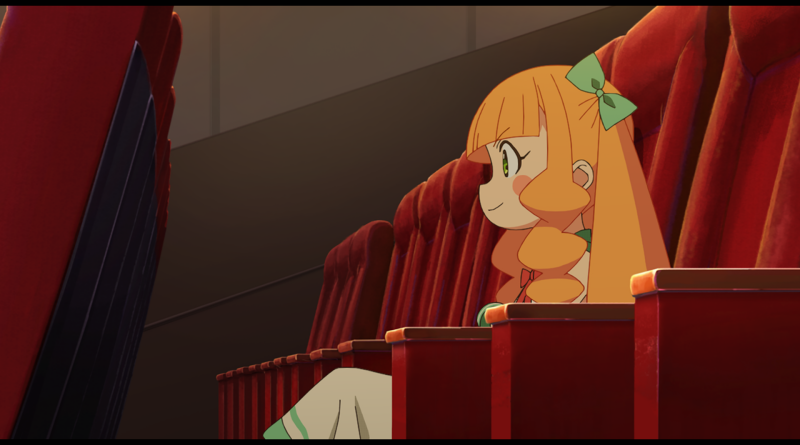 Pompo the Great is here! After making their name by turning many incredible films into fan-favourite hits, Anime Limited is excited to announce that they are bringing cinemagoers the opportunity to see a film that shares their passion for cinema as both an art form and experience: Pompo the Cinephile.

Following a fictional film studio as they embark on making their most ambitious feature yet, the film is an enthusiastic and unabashed celebration of cinema that deserves to be seen on the big screen that inspired it at selected cinemas from Wednesday 29th June.

The debut feature film by the new animation studio CLAP, Pompo the Cinephile follows Gene Fini, an assistant at the acclaimed Peterson Films in the heart of the glitz and glamour of Nyallywood. His eyes may be dull but his passion for films is unrivalled, but when the pint-sized producing prodigy Joelle Davidovich “Pompo” Pomponette tasks him with directing MEISTER, his very first feature, Gene will learn that it takes a family to make a film.

With a charming cast of characters ranging from the infectious enthusiasm of Pompo, the youthful hopefulness of aspiring actress Nathalie Woodward, and the charms of Martin Braddock – an affectionate homage to screen legend Marlon Brando – this filmmaking family is sure to ignite the creative fires of anyone working, or with an interest, in film.

A film that truly blends the stylistic energy of anime with a passion for live-action filmmaking, Pompo the Cinephile proved a surprise favourite of anime and film fans alike on the festival circuit last year, with many praising its inspiring energy and visual metaphors – including arguably the most exciting depiction of editing seen on the big screen! In a world where debates rage about 3-hour long blockbusters, Pompo the Cinephile will have you beaming from ear-to-ear and your filmmaking fires ignited in a comfortable 90 minutes.

Pompo is a talented and gutsy producer in “Nyallywood,” the movie-making capital of the world. Although she’s known for B-movies, one day Pompo tells her movie-loving but apprehensive assistant Gene that he will direct her next script: a delicate drama about a tormented artistic genius, starring the legendary and Brando-esque actor Martin Braddock, and a young actress seeking her first break. But when the production heads towards chaos, can Gene rise to Pompo’s challenge, and succeed as a first-time director?

Directed by veteran animator Takayuki Hirao and produced by brand-new animation studio CLAP, Pompo the Cinephile is a rollicking, exuberant ode to the power of the movies, and the joys and heartbreak of the creative process, as a new director and his team devote their lives to the pursuit of a “masterpiece.”

Pompo the Cinephile will be shown at selected cinemas in Japanese with English subtitles from Wednesday 29th June 2022, and with an English-language dub from Thursday 30th June 2022. The film is rated 12A.

For more information and to book tickets, please visit www.pompofilm.co.uk