Modern Cinema’s enfant terrible or the naughtiest school boy on a film set unleashes the ultimate cut of his latest button-pushing provocation. Clocking in at nearly six hours, we are in TV mini-series territory, although this goes to places even HBO would fear to tread. Lars has always liked to shake up sensibilities, a mix of impish prankster and rigorous intellect (an art-house Jeremy Beadle with a comprehensive Bergman collection) with a fixation on the moral strictures and hypocrisies of the act of sex in such varied films as The Idiots, Anti-Christ and Breaking the Waves.

Nymphomaniac feels very much like his final word on the subject, an amusing, sometimes shocking, turgid and tumescent piece of cinema and also a watershed moment for what is acceptable in mainstream cinema. By seamlessly integrating actors’ heads onto the bodies of adult performers the line between film and pornography has been irrevocably changed (although one wonders if a director with less cache like Brett Ratner would be able to get scenes of un-simulated double penetration past the film censor). Nymphomaniac is a film about sex and sex addiction and not a sex film, there is a distinction; one which only the most dedicated of onanists would argue with.

Told in seven chapters, each exploring a time in the life of Joe (Gainsbourg) as recounted to Seligman (Skarsgard) after he discovers her beaten and abandoned near his apartment building. Are the stories she tells (curiously inspired by objects in his apartment a la The Usual Suspects) provocations to shock and arouse the gentle, bookish bachelor? Or is she looking for condemnation, twisting Seligman’s view of her to see the evil inherent in Joe’s nature and galvanise Seligman from his intellectualisation of this most primal of pursuits.

The split into two parts of the film is less to do with length than an abrupt change in tone. Part 1 is the fun, breezy part helped in no small measure by the performance of Stacy Martin as the young Joe, able to credibly portray a teenager’s transition to woman and the awkward sexuality and desire that goes with it. Part 2 is at times an almost unwatchable descent into hell that will leave you bruised, beaten and as desolate as Joe herself. Gainsbourg has always been a difficult actress to warm to, distant and one note, like someone coming round after anaesthesia; here she works perfectly, always vulnerable but hard and removed from society, jaundiced and ironic as a shield from pain rather than the studied posing of a hipster wishing to provoke.

Follows Joe from her loss of virginity to Jerome (LaBeouf), her sexual misadventures on a train with a friend as they try and outdo each other in sexual conquests during one long journey. What follows is love, betrayal and the downward slide into sex as compulsion and addiction, removed from the free spirited anarchy of her early experimentations. This is the most cinematic that Von Trier has been in ages: free of the deliberate restrictions he has previously placed on his work he flies unfettered, at times ragged and rough and also beautifully pictorial he has developed his palette considerably. From the sterile exactitude of Europa to the wilfully perverse restrictions of the Dogma 95 manifesto, Von Trier has always had a distinctive style and an ease with the form, but feeling the need to place strictures on his abilities in order to find his form. Whether this is a Calvinistic desire for Spartan purity or attempts to show off only he knows for sure.

Despite the infrequent hard core sex scenes the most shocking elements of part 1 are the accents of LaBeouf and Slater. As Joe’s father Slater’s is the more forgivable as he has a tenderness and compassion which is by turn creepy (there are hints that his relationship with Joe may not be entirely wholesome, but as it is seen through Joe’s eyes it may just be her first love) and melancholic. LaBeouf on the other hand is all over the place: is he from Manchester, Birmingham, South Africa or is he even Chef from the Muppets? As a dangerously charismatic rebel or master of the universe (LaBeouf has said he modelled his performance on Christian Bale’s Patrick Bateman, but none of that shows on screen, he just seems like a nasally twanged passive-aggressive bully with a seven-pump technique that must be about as satisfying to receive as he is to watch here) he is an abject failure, as an advert for the skills of a good vocal coach this will stand as an object lesson for future thespians.

Things take a more blackly comic turn when the wife (Uma Thurman) of one of her lovers turns up at her apartment with children in tow, which shows the consequences of her rapacious sexual activity. Thurman nearly teeters over the edge with her histrionics but the sense of pain is palpable, the betrayal and realisation that she will now need to press life’s reset switch in order to go on etched into her face. Von Trier may be goading you with all the flesh and semen on show but he is also a moralist trying to make you question your enjoyment.

What bubbles beneath the surface at the climax of part 1 comes very much to the fore in part 2. Abandon hope all ye who enter, for much like Jamie Bell’s shitty little sadist no punches will be spared. Unable to derive any sexual pleasure Joe embarks on a journey of pain, both masochistic and sadistic in tone.

Has had the most extensive embellishment from the cinematic cut and also contains a scene so horrific and divisive that the film never fully recovers from it. The dialogue between Joe and Seligman’s is more pronounced as they stop the narrative and discuss the implications of Joe’s actions and visions. It makes for a more digressive tone and slows the narrative down; it also allows the audience to explore in uncomfortable detail their own ideological response to the actions played out in front of them.

Awkward is the sexuality here, whether it is hiring an interpreter to proposition an African man as she doesn’t speak his language, which results in an awkward threesome, or the relationship with Jamie Bell’s K, a sadist without a safe word (although in reality doesn’t that just make him a misogynistic psychopath?). The violence meted out to Joe is incredibly uncomfortable and is one of three scenes in which the context is manipulated to depict a shocking tableaux. This reaches a high or low point in a scene of a self-administered termination that the film barely recovers from. It does inspire a very complex debate within the film about the right to choose and the merciless reality of the act, however its depiction is staged like a piece of grand guignol theatre, when showing it as the mundane reality of a normal surgical procedure would be enough. Here Von Trier shoves your nose in the dirt like you are a recalcitrant dog and the nuance of the debate is lost in disgust.

In a film so heavily in tune with the rhythms and awkwardness of the sexual act, it is apt that it comes to a fitting climax. It would appear that Joe is not the only one who is lying here and for all Seligman’s intellectual arguments he is at nature a base beast with urges to placate. We may not know what side of the right-to-choose fence Von Trier sits but he emphatically believes that ‘no means no’.

Extras amount to talking head interviews with the main protagonists (LaBeouf is actually very engaging and animated, pity he didn’t bring this to the screen); we also have a Q & A with Edith Bowman. Strictly by the numbers fare. Would anyone have the stamina for a 6 hour Lars Von Trier commentary?

An incredibly challenging piece of cinema that has a five star opening but with a rather thorny resolution that is rewarding but unforgiving and difficult to watch. The meat is in Part 2 – if you stay the course you get a rewarding, absurd and truly original work.

Nymph()maniac: The Director’s Cut Vols 1 and 2 are out now on Blu-ray. 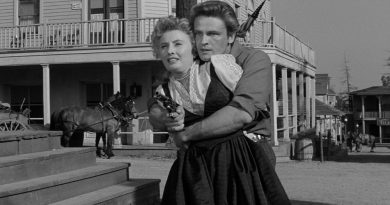