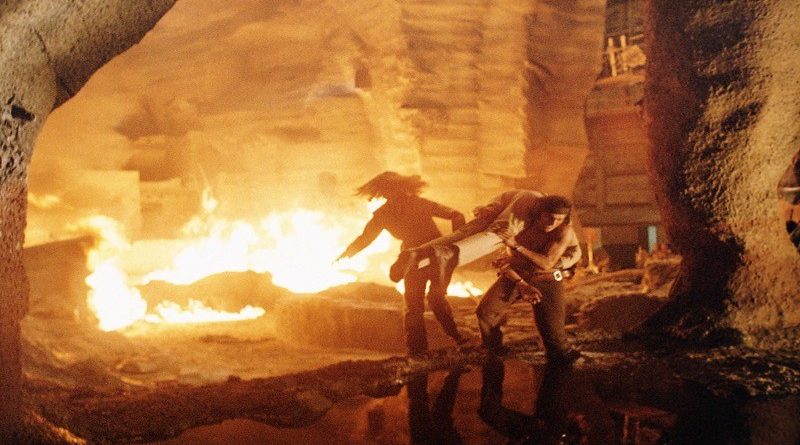 This enjoyable double feature of Indigenous American themed horror films shows how the genre made room in the 70s to address racial and ecological issues.

Both films dip their toe into ‘so bad it’s good’ territory, but that’s half the pleasure.

Duran is convinced the ghost of medicine man Abner (George Clutesi – an indigenous Tseshaht actor from Vancouver Island) has unleashed an apocalyptic curse on the Hopi. Payne thinks it’s vampire bats from Mexico.

Both go head-to-head with the youngish tribal council chairman (Stephen Macht) who is trying to sell some of the reservation land to an oil company, to bring much-needed cash to the Hopi.

The glimpsed insights into Hopi life and ritual sites are the best thing about the film. The special effects, once the bats turn up, are execrable – it’s hard to believe that Carlo Rambaldi (ET, Alien) was responsible.

Shadow of the Hawk sees the wonderful Chief Dan George (a Tsleil-Waututh actor from British Columbia, Academy Award nominee for Little Big Man, The Outlaw Josey Wales) play aging medicine man Hawk, from an un-named Pacific North West tribe. When an ancient curse threatens his people, Hawk travels to the city to get help from his estranged grandson Mike (Vincent).

Shadow of the Hawk dials down the dramatic events – and the supernatural elements are very ‘material’. The film works pretty well for precisely those reasons, helped along by Chief Dan George’s effortlessly cool, humorous, grounded performance.

Shadow of the Hawk also has some striking stunt work, especially in a fight between Mike and a bear.

The two films make an intriguing and enlightening double bill, unless you’ll be outraged that the main characters (Mancuso, Vincent) are played by non-Indigenous American actors.

Nightwing and Shadow of the Hawk are out on Blu-ray on 15 March.