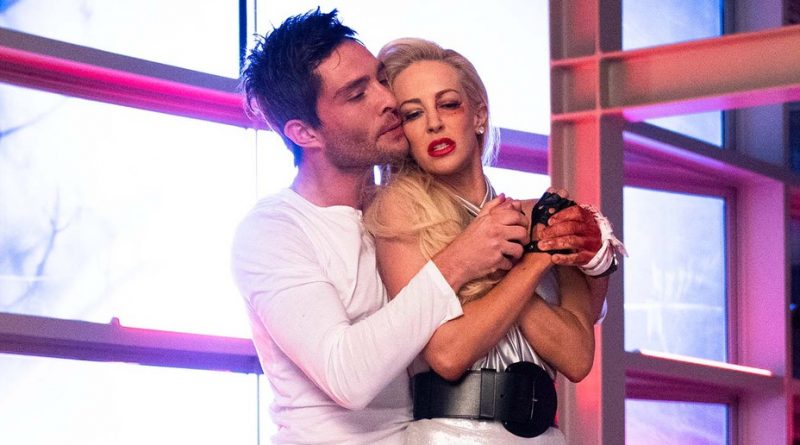 As the film opens it spends the first five minutes allowing the lead female role Catherine Black (Linton) to break the fourth wall and tell the audience a little about herself. She talks of her clothes, her beauty, “I may seem perfect” she declares yet what follows is a description of a hedge-fund manager with many addictions (exercise) and prone to “indescribable violence,” basically a murderous psychopath. The vision when she discusses the concept of how male spiders risk death in order to mate followed by her ingesting a spider…a little much.

The audience is then introduced to petty thief and conman Tyler (Westwick) who responds to Catherine’s online advert for a roommate in her Malibu home. After viewing the property, Tyler thinks all his dreams have come true; how wrong could he be. Unbeknown to him, Catherine knows who he is, as he stole from her granny, but that aside she thinks she may be able to not kill him, killing be something she has done to all her lovers before him. All appears happy until Tyler discovers Catherine’s secret – a freezer of severed body parts, all of which were “bad people” of course and the two battle to decide if they can live together in peace, harmony and love or is Tyler just another notch on her bed post and a soon to be mutilated body in the freezer.

There is certainly homage to many great movies of the 1980’s as we see segments inspired by dance-along flicks such as ‘Flash Dance’, ‘Footloose’ and ‘Dirty Dancing’ with songs galore and dance moves to match for tunes such as “Maniac,” “I’m So Excited,” Take on Me” and “Hungry Like a Wolf;” Hearing 80’s tunes such as these is the best feature of the movie. When we see Westwick dancing along to a tune in a red silk robe, things have gone a little too far and some scenes with the two battling appear awkward. The onscreen chemistry between Tyler and Catherine is just not there. Whether they are dancing, being romantic or trying to kill each other there are no enjoyable elements and their debate regarding “couch” versus “sofa” or how to pronounce “Van Gogh” appears pointless and offers nothing to the narrative.

With regard to Catherine’s weapon of choice, take your pick; a broken martini glass, a hedge trimmer, a crossbow, and a chainsaw although after running through every Texas Chainsaw Massacre film created this last one was opted out. Of course, no murder scene would be complete without a costume change, but the number that Catherine goes through is beyond ridiculous, so much so that even Tyler comments on it. By the end of the movie we have both characters frequently breaking the fourth wall and arguing over it, the occasional element that raise a smile not because there has been comedy but because some aspects are simply laughable.  More strong language is used than you would ever expect and as a viewer you begin to wonder…what just happened!

Me, You, Madness is available for Digital Download on 19th April 2021