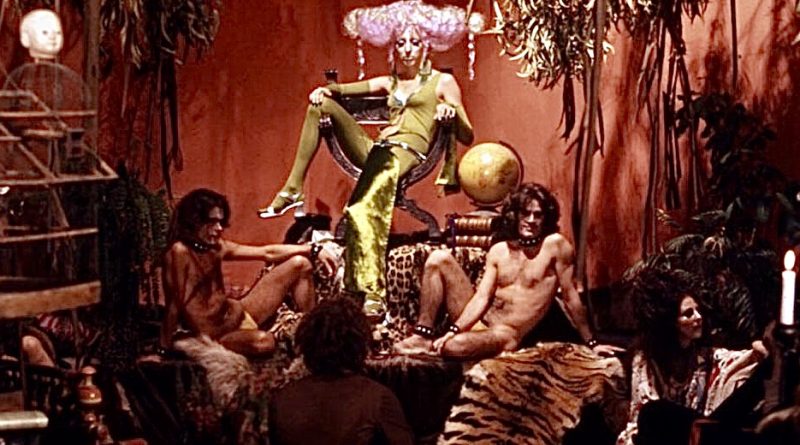 This sensuous and sexy, head-trippy hymn to gender fluidity, beautifully restored with crystal clear images and colours like on the first day of creation, is a total must see.

Two young men visit a white, modernist house. They are welcomed by a strangely attired man-woman, who leads them through a series of rooms that are decked out as squirming, psychedelic tableaux, pulsating visions of sensual and sexual excess.

The tableaux feature a lot of nudity and some old-time, real fucking, as well as freaky-arty stage shows and circus love grooviness. There’s no dialogue, just a burble of whispers to accompany the wild imagery and the ‘knob-twiddly’ electronic music by Warner Jepson.

Created out of the Haight-Ashbury, San Francisco counter-culture scene as the 60s turned into the 70s, Luminous Procuress is a jaw-droppingly weird and beautiful film. It is slightly reminiscent of Fellini’s Satyricon in its flawless, surreal imagery – but more like the work of Kenneth Anger and Jack Smith in terms of its sexualised content.

It is the sharp beauty of each and every mesmerising image that makes this film so extraordinary and unique. I can’t think of any other film that has such clear and enchanting, synesthetic imagery – all the time. It just keeps coming at you.

The contrast between the clarity and colours of the images and their flowing, continuous presentation has an intoxicating, hallucinatory effect. You really feel like you are feasting on the images, there’s an opening of the viewer’s third eye and the exquisite visions flood in! You will definitely feel spiritually enriched after watching Luminous Procuress.

An underground sensation at the time of release, Luminous Procuress was a forgotten film for decades but has now been brilliantly restored and can take its place at the apex of visionary cinema.

Luminous Procuress is out on Blu-ray from 30 May.