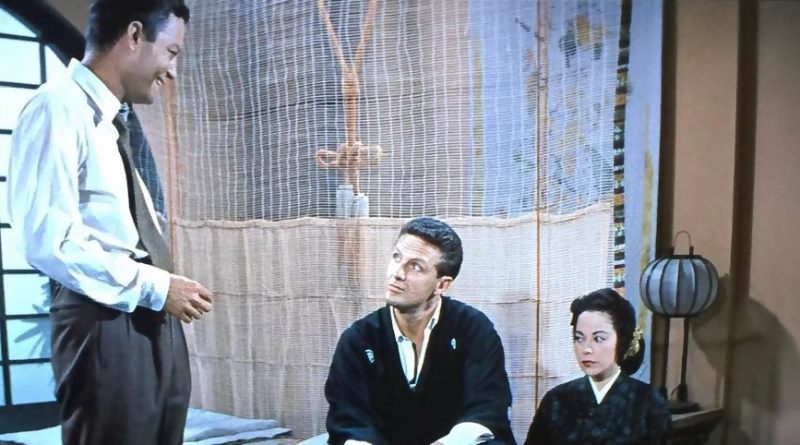 The most beautiful crime thriller ever made, House of Bamboo is an absolute must see, both for fans of crime film and of CinemaScope colour cinematography.

Japan, 1954: a daring raid on a munitions train leaves an American soldier dead. As the occupying US forces investigate, ex-con drifter Eddie (Stack) arrives in Tokyo to meet his wartime buddy Webber.

But Webber has been killed in a shootout with the cops, leaving his widow Mariko (Yamaguchi) as Eddie’s prime contact in the colourful confusion of the city.

When Eddie tries his hand at some pachinko parlour extortion, he bumps into tough guy Dawson (Ryan).

Before long, he is part of Dawson’s gang, and helping plan another heist.

This is a jaw-dropping film to watch, despite the typical plot. It is absolutely packed with long, visually interesting location shots. Director Fuller is famous for his muscly, no-bullshit approach, which makes the sheer quantity of action and movement within the massive Cinemascope frame surprising.

The frame is so big that you feel the camera swooping through locales. The frame is so packed that there are almost always several things to watch at any one time. And when there aren’t – in the planning sessions and the intimate chats between Eddie and Dawson – the film flags a bit.

That’s because the huge frame makes close-ups difficult; the only options are long single shots that recreate buzzing environments or static compositions.

Cinematographer Joseph MacDonald excels in capturing both the movement and the compositions. The camera glides at the same time as characters sweep into and across the frame. The film is such a dynamic experience that you find yourself second guessing which part of the frame a body will exit from.

The action and movement aren’t just macho types slugging and shooting it out, either. They are as often carefully crafted encapsulations of the bustle of real Tokyo locations, such as the rooftop traditional dance and several street scenes.

The action sequences are breath-taking too: the train heist, the payroll robbery at the chemicals plant, the amusement park finale. There’s a tracking shot during the payroll robbery that has iconic stamped all over it, and it is bookended by brilliant examples of static shots that are packed with activity. Every crime film maker needs to look at these shots and work out why they are so strong.

The inexorable compositional beauty lends a sort of pathos to events, especially to Dawson’s demise on the rooftop nursery carousel at the end of the film. Critics often comment on the homoerotic undertones to the relationships amongst the gang members; the lovely compositional rigour consolidates this, I think.

The clean, bright Tokyo light is Macdonald’s best friend here – those sky blues, kimono reds and whites, girder greys really stand out. You’d think you are watching a 4K restoration but the 2K restoration is sufficient for once.

Don’t miss this: a perfect widescreen Xmas present for your classic film fan!

House of Bamboo is out on limited edition Blu-ray on 7 December 2020.