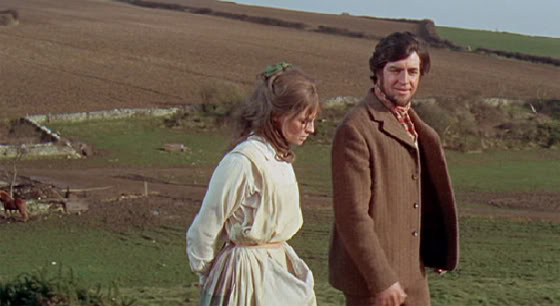 Do yourself a favour this weekend: find out where Far From the Madding Crowd is showing and go and see it on the big screen. Unfortunately, it’s only on at selected cinemas for a day or two through the ICO (Independent Cinema Office).

This is an epic, epochal, monumentally great piece of 60s British cinema (well, okay, backed up by MGM megabucks) and it’s an unadulterated if melancholy tinged joy from start to finish. The years of tv screenings have deadened the impact of Far From the Madding Crowd’s vision, its tense and foreboding mood, its almost ethnographic, rural idyllic details. But the film rises again, scanned at 4K and restored at 2K from the original 35mm negatives, with cinematographer Nicolas Roeg overseeing the restoration process. The film’s aspect ratio, which was incorrect on its original release, has also been corrected as part of the restoration.

Headstrong, passionate Bathsheba (Christie – considered a controversial choice because she was fashionable and blonde! Was everyone just too literal/ claggy as sheep shit back then, one asks?) inherits a large farm in rural Dorset. Struggling to manage the estate, she becomes involved with three very different men: an honest and hardworking sheep farmer (Bates), a wealthy but tortured landowner (Finch), and a reckless army officer (Stamp). It sounds trashy as all hell, but it is very well done in every aspect. Oh, and the source novel is by Thomas Hardy.

I can’t remember the last time the magnitude of how much British cinema has changed for the worse was brought home to me. Far From the Madding Crowd may have been dismissed as merely glossy in the 60s, but it now looks like a last hurrah for confident, straightforward storytelling, developed within a visual framework that is both heartfelt and poetic; and infused with a compelling sense of dreadful foreboding. It definitely comes across as a ‘total film’, in other words one in which every aspect fits well with every other.

The tense mood is a big surprise but it’s there from the start – it’s the filmic version of Hardy’s sense of Fate, played out in some wonderfully abrupt, edgy editing by Malcolm Cooke and Jim Clark. The early sequence in which Bates’ Gabriel Oak loses his livelihood is a masterclass in film suspense.

The screening I attended, there were sniggers every time Terence Stamp’s Sergeant Troy appeared in his very tight, appendage delineating britches. He looks like a ‘screen icon’ throughout the film; the scene in which he woos Bathsheba with his swordplay skills at Maiden Castle is rightly iconic, with its striking elements of bright light, blue sky, red tunic and flashing blade.

If Far From the Madding Crowd feels now like a long-lost love song to the landscapes of southern England, it is also packed with real or imagined details of folk customs that had disappeared long before the film first came out.

This faux ethnographic tendency – which picks up and runs with an important element of Hardy’s novels – is also evident in the rural ‘characters’ who litter the film: they may tend to Pre-Raphaelite exaggeration in their dress and manners but they are ‘real faces’, not the sort that turn up in film’s much back then – and certainly not now when ‘ugly’ features have been utterly banned from the screen. Schlesinger recruited over 700 local people to work as extras and many of them look fantastically normal and ‘unprofessional’.

The camera lingers on these faces in a series of thought-provoking pans that have very little to do with the story except in allowing it to breathe, to engage with Hardy’s symbolic realism and his sense of low lives dominated by fate and only transfigured by the retelling of them.

It’s hard to over-estimate the importance of cinematographer Nicolas Roeg to the success of Far From the Madding Crowd. The landscape shots are long and beautiful in Panavision and a tawny Metrocolor; there’s more of them than ever before, thanks to the restoration work. Characters are often shown as specks moving across bleak grassy uplands and wind-swept valleys.

There’s much  associative use of colour: the self-destructive, hopeless obsession of Finch’s aging Boldwood is linked to saturated ochres; the scarlet of Troy’s tunic crops up in curtains in Bathsheba’s manor house. She caresses the curtains while looking straight through Bates’ Gabriel, who seems, in turn to think she’s looking at him. The film is littered with such intertwinings of colour, scene after-burn and character psychology – it is part of what makes the film so successful and feel so aesthetically important.

Frederic Raphael’s dialogue is brusque, often almost ‘on the nose’; but there are also several lovely, mood-defining non-dialogue sequences which immerse the viewer in a ritualized version of 1830s rural life. The late-summer dinner scene with the farmhands singing folk songs as the leads join in is so languorous and intensely nostalgic it smarts, nicely.

Thomas Vinterberg’s remake is coming out in May, with Carey Mulligan, Tom Sturridge, Matthias Schoenaerts and Michael Sheen taking the leads; but it’s never about the acting alone is it? From the look of the trailer, Vinterberg and cinematographer Charlotte Bruus Christensen have gone for a rather obvious Malick style golden hour look.

I doubt that the new version will be as expansive, epic, encapsulating and immersive as the 1967 version – which I’d sum up as ‘the perfect costume drama’ or rather the costume drama transfigured into something more elemental and powerful.

Far From the Madding Crowd is at selected cinemas from 13 March and out on 01 June on DVD and Blu-ray.