Super Man. Splendid film! Now 85 Dennis Skinner has been an MP since 1970. The third of nine children born to a very poor family (he didn’t see the sea until he was 17) in a mining village in Derbyshire, he has been a committed Socialist for his whole life.

A coal miner for 20 years, a trades unionist, then a local Councillor until he became the Labour MP for Bolsover, he has fought for the rights of the working class for over 50 years. Dennis:

The film comes down somewhat on the side of ‘Skinner is great’ – but in truth he is! A man of real principles, he has stuck to his beliefs throughout the changes in the Labour Party over the years. He won’t pair; won’t go on all-Party foreign trips as he thinks it is wrong and can’t see himself being buddies with Tories, Liberal Democrats and those from the house of Lords. He has been suspended from Parliament at least ten times. As he is a top speaker, it is only right that the film shows a lot of him speaking. We also see his four surviving brothers, who are equally passionate about politics and the working class. All the Skinners are committed to true Socialism. The brothers turn out to be fascinating. One sings along with Dennis who has a very pleasant voice. Dennis sang early in his life. It is that, he says, which gave him the confidence to speak in public.

I have met Dennis on a number of occasions and the film exactly captures how very sure he is of himself and his opinions. He is still bitter about the miners’ strike. Dennis speaks of his various campaigns and how proud he is. He speaks with pleasure about the 1945 Government which introduced the National Health Service, Pensions for all, Council housing etc in a country with very little money.

“That was Socialism,” he comments.

He nearly always wears his ‘uniform’ of a tweed jacket and a red tie. He has kept to a routine for over 40 years: he gets to the House of Commons very early and considers it his place of work. Dennis has kept his accent and way of speaking, but his use of English encompasses the best of the language. We are given a picture of his love of the countryside around Clay Cross. He gives this up when he comes to London to work as an MP. As a compensation, he walks around and gets to know the London parks. Dennis lyrically extolls the beauty of a magnolia tree.

Some surprising facts come out: Dennis is a huge fan of Woody Allen films, while accepting that not all are great. His constituents comment on the humility of the man – although I haven’t found that. He doesn’t listen to people in the sympathetic, kindly manner that my friend Tony Benn used to! Those that he represents, however, insist that he is compassionate and generous.

The film, written and directed by Daniel Draper is very much an in-depth look at the man, although the film leaves out his marriage, children and grandkids.

“I’m here to  represent the working class. I will never ever give in.” Dennis asserts.

There’s only one Dennis Skinner and here he is in a film that is really worth watching. 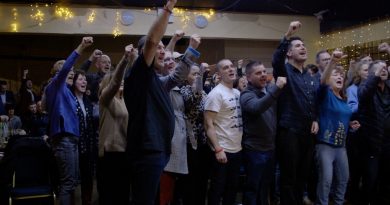