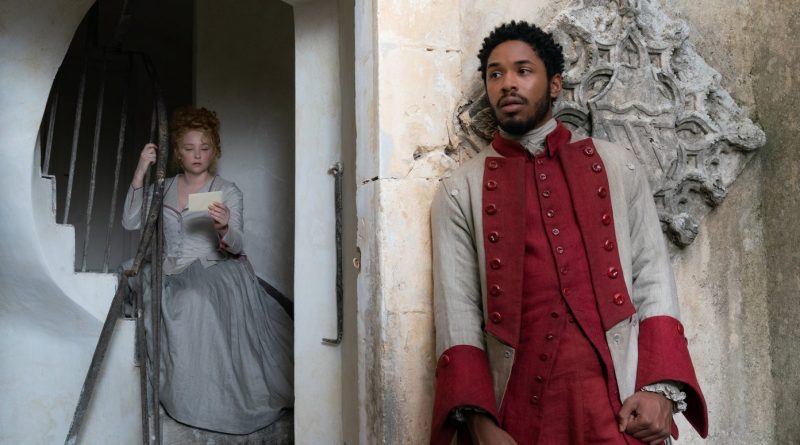 CYRANO is a musical version of Edmond Rostand’s famous drama, Cyrano de Bergerac. There is no big nose here. Cyrano (Peter Dinklage) is a man of short stature. In love with the beautiful Roxanne (Haley Bennett) he is unable to tell her as he believes she would reject him.

Best friends with Roxanne since childhood, Cyrano watches as she falls in love with handsome Christian (Kelvin Harrison Jnr.). Christian joins Cyrano’s regiment and is befriended by him. After Christian gets Cyrano to compose a letter to Roxanne and later to speak to her pretending to actually be Christian (see picture above), Roxanne is even more smitten with Christian. Poor Cyrano, so much unrequited love, while lovely Roxanne, helped by her maid, Marie (British actress Monica Dolan), is completely unaware of his feelings for her.

The story develops in a quite unexpected way and it’s by no means a light frothy musical, in spite of the many songs which are all sung well, but not particularly memorable. Ben Mendelsohn, as the villain De Guiche sings one song with real style. There is also a song sung by soldiers with snippets from letters which the soldiers wrote just before they went into battle. The movie is based on the original stage musical with songs by Bryce and Aaron Dessner and lyrics by Matt Berninger and Carin Besser.

Peter Dinklage, who has been appearing in films for many years, has suddenly become a leading man. He well deserves this and gives a lovely, rounded performance showing it is not just appearance that makes a person desirable!

Haley Bennett is not only good to look at but also has a lovely singing voice and Kelvin Harrison Jnr’s Christian manages to give a sturdy performance of a man who, while not stupid, is stronger with his sword than with words.

Director, Joe Wright, has set his film in late 17 century Sicily and there are exotic costumes and lovely scenery. 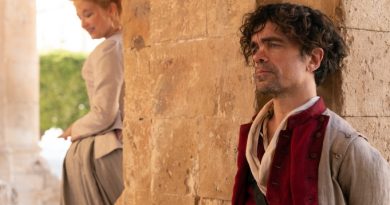 CYRANO – Next Level Song and Dance

One thought on “Cyrano (12A) |Close-Up Film Review”