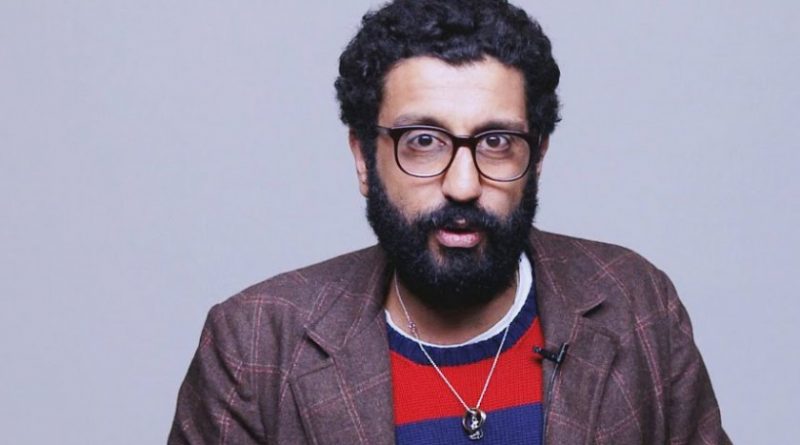 We grabbed a chat with BBC River sidekick Adeel Akthar on the eve of the final episode last week. The Utopia, Four Lions and Pan star is busy rehearsing ‘A Christmas Carol’ in preparation for a Christmas run at the Noel Coward Theatre. He squeezed us in after a long day of rehearsals. In-between a post-theatrical snack, a coffee and catching the tube back to his family in time to see his final appearance as Ira King, we talked social politics, acting opposite ‘manifests’ and all these London-based dramas.
His final appearance as Ira, for now at least…

We hear you are rehearsing A Christmas Carol at the moment. How is that going?
Really good actually. A lot of fun. I haven’t done theatre in ages and you forget how much stamina you need. You’ve got to do a lot more, hold a lot more words in your head!

So tonight is the final episode of River. What would you like to say about it now that’s coming to an end?
I hope people enjoyed it. I hope they are following the story and finding it compelling. I hope that they want to see another one and I hope it’s achieved what it set out to be.

So there is room for more River in the future?
There’s always room for more after a first series. We just have to see if people like it! I think people have enjoyed it, especially the first episode, so hopefully it’s going to come back.

The series is heavily skewed from River’s point of view. We only see the drama through his eyes. However, if the show was rebranded Ira, how would you describe your character’s journey?
He is forced into a work situation and life experience that means he has to come face-to-face with himself and his own fallibilities, and hopefully comes out more well-rounded,  a more experienced person and a more experienced police officer, who is better at his job.

It almost sounds like that could be a description of River’s struggles…
Yes. Different types of struggle.

In regards to the ‘manifests’ in River’s mind, were there any techniques you used in order to to act as though you are the only other character in the room?
We did a lot of takes where they weren’t there! So if there was a ‘manifest’ (a character appearing onscreen only in River’s mind) there would always be a shot with them and one without. If we were lucky enough to do it without them for the first take then that would make it a lot easier for the second take. But if not, then it’s just the idea of concentrating on who you are supposed to be listening to in that situation.

What was the hardest part of your role in the series?
What I did find hard was the pressure of just trying to do the best i could, being around those kinds of amazing actors. I was very humbled. Whenever I get a job I feel humbled that someone has entrusted me to say their words.

Back in 2002 you were travelling for an audition in New York and your plane was escorted to JFK airport by fighter jets where you were held for questioning by FBI agents for 9 hours. Not to make light of it, but did that experience inform your research, could you give Abi Morgan [the series writer] any tips?
She’d done so much research on those sorts of characters and police interrogations… but I was interrogated by some not very nice people, and they weren’t very professional, it would be a disservice to try and do any research into any kind of interrogation methods because there wasn’t much [of that kind of questioning in River] – they were a bit nasty and a bit bullying and weren’t really interested in anything I had to say.

You started a petition at the time. How did that progress?
I do try and keep an eye on anything that touches on that kind of issue; profiling, interrogation, anything that infringes civil liberties. But I’m not involved in it as much as I should be.

How have your parents reacted to this new role? You made the switch to acting after a law degree and we’ve seen you say in the past that they would probably be happy if you could just wear a smart suit for a change….
I think they were happy with what I’ve done and I think they’ve liked it, but up until River it was a bit of a strain because I’d only played some quite dodgy characters which weren’t very smart and they couldn’t tell their friends about. But with River they definitely could because I was playing a policeman!

You tackle some big issues with the roles you take on; terrorism, mental illness, surveillance, (increasingly) immigration in River, community and economy – is it the big picture or the specifics that attracts you to a particular project?
I just want to be involved with things that interest me, that resonate, it’s not usually issue-based. Sometimes it is, other times its more about a particular story that, as long as you do it properly and honestly, almost without realising it, it’s giving an advantage to people who are marginalised or who are feeling disconnected and that helps you understand them better.
Although I am aware of lots of things that are happening; that affect young Muslim men in regards to disenfranchisement – that’s something [which I can appreciate how it could happen], that I’m interested in and needs addressing.

I just think that if I do my job well as an actor, for example with Capital

, that wasn’t the primary focus for me taking that job, but indirectly it is speaking to that and addressing that issue. It’s a balance of lots of things but I would never want to concentrate on one [issue] more than another. It has to be something that resonates – you know, in a year’s time that [resonance] might change.

Talking about Capital (the upcoming BBC series with Toby Jones and Adeel) Wunmi Mosaku who will play Quentina has said – “It’s hard to be young in London, it’s hard to be old in London, it’s hard to be from London, It’s hard to be from outside London”. River and Capital both explore the paradox of London – of being surrounded by people but feeling lonely. You’ve recently bought a house in Camberwell, how does London make you feel?
I was born in London but my parents moved out to the suburbs near Uxbridge. I went to boarding school at a young age and then did a Law degree at Oxford Brookes, drama school for four years in New York then back here since 2007/8. So it’s been about seven years here in London now which is the longest place I’ve lived in my adult life. I feel quite at home here now, I definitely call it home.

[Alienation] is a common experience that you never really have the opportunity to fess up to it really, we don’t really want to show that limitation, that we can’t make a go of living in a big city – that we can’t hack it or something – and that’s why these two, Capital and especially with River, [people especially appreciate it] because the characters are fragile and show that fallibility.

Do you ever feel settled though?
The unsettled feeling is also one of the reasons why you wouldn’t want to be anywhere else. I feel more settled now than I ever have done. I’m married now, I have kids and a house. Even though I feel settled in that traditional sense I still feel like there is a vibrancy that I wouldn’t ever want to go away.

We of course, must ask about Utopia. What’s the jig there?
They finished with it and then David Fincher was going to do something with it. They were going to make it into a long HBO TV show but –  I was doing Pan at the time I was acting alongside Rooney Mara, who was going to be playing Jessica Hyde – so I asked her what was going on with it and she said it fell through for the minute but they were going to revisit it.

In terms of the British one, I think its done really. That’s it now, nothing more.
I think Dennis [Kelly] has either had the idea or has written closing episodes, but that’s just the way it is, if you haven’t got the audience. I think every writer knows how something is going to be a couple of series down, but without the money or audience to back it up its just… [crackles]
And then folks, he had to catch the tube back to Akhtar HQ…