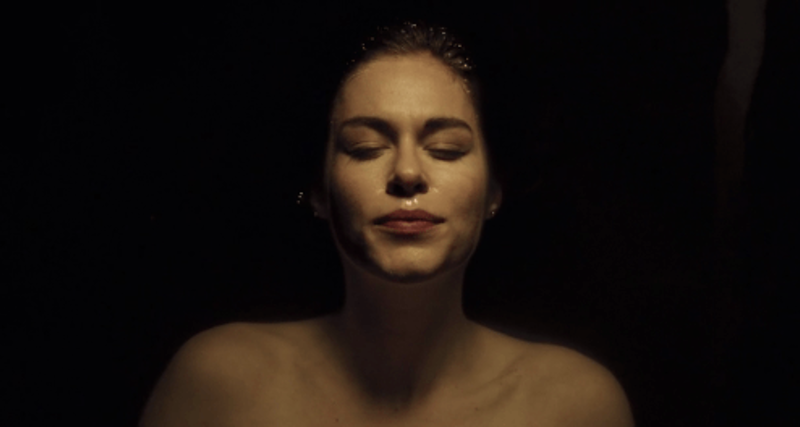 The film has been described as “sexy, disturbing and intelligent” and follows Holly Kane, a young psychologist, whose research is driven by her fear of insanity, who gains funding and research facilities from a respected benefactor but slowly finds herself the subject of her own mind-control experiment.
I joined the shoot in an eleventh floor luxury penthouse suite in a gentrified part of Hoxton, North London, at the end of October.

Producer Phil Harris said that the production was “over halfway” and that he was “over the moon” at the latest rushes (the images brought back from the filming location either on film, tape or disc – the uncut footage that will later be edited into the final piece.). Phil has a background as a successful music entrepreneur and has written, produced and directed dozens of music videos, where he developed his unique editing style which he has brought to numerous projects for Substantial Films.

Why the luxury penthouse suite, you ask? Phil explained that a location was needed that “sold Marvin (Nicky Henson) as a very high-powered government official” and from the penthouse on the eleventh floor right up the very top, there is a 360 degree view of London. Everything’s there. As Phil said, the location calls out “I am Marvin! Welcome to my world!” Phil admitted that the penthouse was the most expensive location for which they have had to pay. So it’s a low-budget film, but, as Phil points out, once this location is “sold” to the audience they will accept that everything is big and expensive.

“The audience accepts now that everything we are showing them is actually very big”, even though smaller locations can be utilised and the sets built up. Some filming was done in Brighton and the Hove Conservative Club because it had some nice wooden panelling.

Phil found the most challenging scene was “definitely the flotation tank.” Without giving too much of the story away, there’s a scene where Holly is drugged and forcibly put into an isolation tank, where her psychological technique is used against her. Phil explained that “building this flotation tank was a difficult job. We had to get above it for filming and so we had to use trestles and build skirting all round to get it all pitch black as it will be used for some effects when it merges with a sea of water.” I suddenly recall Ken Russell’s Altered States with William Hurt in a flotation tank based on John C Lilly’s sensory deprivation research. I wondered, did the producer and director recall this film? Phil said that it was certainly one of the films that Tom had watched.

Holly Kane’s young producer/director, Tom Sands, a film school drop-out, has plenty of practical experience under his belt. Tom has already directed award-winning shorts, documentaries, commercials, corporate films, music videos and Backtrack, his debut feature film – a psychological horror about past-life regression, starring Julian Glover. He also has three more projects in development. Tom is known for his own psychological thrillers. But The Holly Kane Experiment is different. “Its dad’s idea and dad wrote it!” What?

Yes, there is an unusual partnership, because the screenplays, including Holly Kane, are written by Mick Sands, who is Tom’s father. But in this case, says Tom, his father had the idea and wrote the screenplay – entirely his own work. As Tom says, “It is completely his – he’s been working and he’s been working on it on and off for about 20 years I think. The idea of mind-control and to be able to pass subliminal messages to someone’s unconscious without their permission, he’s been thinking about that for a very long time.”

Mick Sands is a very well qualified partner, with a successful career behind him as an advertising copywriter at top London agencies like JWT, DDB and Leagas Delaney, where he wrote more than 60 broadcast TV commercials and won all of the major industry awards, including golds and silvers at D&AD, BTAA and Cannes. He was then commissioned to write the screenplays “Millennium Man” for Parallel Pictures and “The Red King” for Warner Bros.

I was curious that in a film where the theme is that the mind is being controlled all of the time, what reference points were used. Tom made the point “I think that if you are putting loads of stuff in to a film it does have an element of mind-control to it. You have to ease up a little bit at some point. I tend to do loads of research at the beginning and then just let it come.”  He went on to say: “unlike my first film which is a horror film, this is a psychological thriller and this is the genre that I want to do – so that’s my life. I didn’t have to go away and study, all the reference points were already there. I did reach a point where I had to just stop looking at stuff and screwing myself up.” How does he advise an aspiring indie producer here? “I think you should just read the screenplay and do the shot – that’s how it works for me anyway”.

What part of the film-making process does Tom find the most satisfying? It was not actually the shoot itself – but looking at the rushes. As he said “If you’ve had a good day and you’ve seen the rushes and you’re seeing it come though then that is satisfying.” It’s the point “before you get in the edit and you have to start hacking away at stuff. It’s the sweet spot – when you’ve got it all in the can and and you haven’t started chopping away”.

How about Tom’s choice of actors for the leading roles of Marvin (Nicky Henson) and Holly (Kirsty Averton)? He said “It’s not just about picking the right person for the role but making sure that they match as well. Holly Kane is such an intense screenplay that it is vital that match on screen. Their personalities must match because they have to do some quite intense stuff together – and that’s what’s great. They get on really well.”

Tom hasn’t found it any easier to get funding after each production, even though he has the unique writing partnership with his father, Mick. He did one film which where he raised funding through private investors, and the same has happened for Holly Kane. With his planned bigger budget films, a lot of time has to be spent to get investors on board and get them to agree with each other can be very hard. His advice on funding for aspiring indie producers? “I would say [it is] easier on a lower budget because you can just go direct to people, people just for the money, you know, one or two people.”

So what’s in the pipeline after Holly Kane? “We’ve got two other films which are in development – one called Thanitos – a psychological thriller about “lucid dreaming” and the other is called The Road to Ashvem which is a romantic comedy about backpacking set in India – these are bigger budget productions.”
Tom was happy to confirm that the story that there are over 60 locations for The Holly Kane Experiment, is entirely true.

“Yes, 65 locations in just about three weeks. My first film [Backtrack] was shot in two weeks and that had forty or fifty locations.” It certainly sounds as if the low budget hasn’t impacted on the ambition for the film! “No”, says Tom, and, in fact, he feels this makes for a more diverse canvas. T

he low budget restriction breeds ingenuity and creativity. As Tom says, “You have to find a way to do it. Its really stressful and hard work but most of the time you look for a creative solution and I think that’s why low budget is often the breeding ground for new film makers like me. You have to think of new ways of doing it and ways of doing it fast as well.”

The Holly Kane Experiment will be released in 2016. Follow the film on Facebook and Twitter for news and updates.
facebook.com/THKEmovie
@THKEmovie
*Backtrack was released as “Nazi Revenge” in the UK