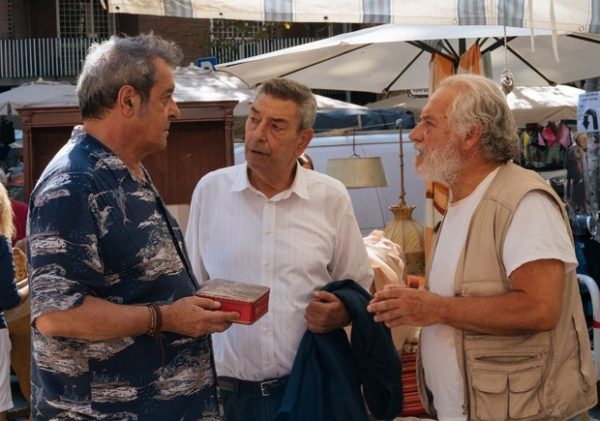 When work-shy Giorgetto (Giorgio Colangeli) and his mate ‘the Professor’ (Gianni Di Gregorio), retired Latin and Greek teacher, both single retired men, decide that their pensions are too small to live on, and that they need to go abroad for a better lifestyle, they enlist the help of Attilio (Ennio Fantastichini), who lives alone but runs a little antiques restoration business. Attilio enjoys his life but boasts, “I’m a citizen of the world. I’m a free man.”

Consulting an academic (Roberto Herlitzka) who tells them about the good things they can find in different countries – lovely scenery, beautiful beaches, cheap living – and also the reasons not to go to some countries: Cuba, because you have to get a local wife; Australia, which has deadly jellyfish – the three retirees decide on the Azores which has the cheapest beer!

The trio meander around various bars in always-sunny Rome and make enquiries about transferring their pensions, drawing out savings, getting a passport and so on. Every time difficulties arise, they go to a nearby bar and eat and drink and bicker about what and how they should depart from their homes and make their way to a new and better life in the Azores. They seem to be using the planning of the trip as an excuse for eating and drinking together. At one point they manage to have a Portuguese lesson and enjoy a meal with the teacher and her mother, who has cooked the meal. Facing difficulties over ready cash, they decide to pool their resources, and each takes on work or schemes to reach their perceived goal.

Gradually it dawns on Attilio that he will miss his daughter and his dog and, in fact, his life in Italy. The Professor also has doubts about leaving after he finally manages to make a date with a woman he has been fancying from afar. In fact, all three have cold feet about the imminent departure.

Bringing a little of the political outside world is Abu (Salih Saadin Khalid), a refugee from Malia, who goes to Giorgetto’s home to take a shower daily. Abu sleeps on the streets. He is an interesting character but has only a small, yet important part in this film.

There are a number of amusing moments, such as the Professor visiting his doctor. The Professor complains, “My liver hurts.” “Liver has no nerve endings; it can’t hurt!” replies the doctor.

The three actors are delightful. Carefully differentiated, each one puts in an honest characterisation. Sadly, Ennio Fantastichini died before the film was released.

The film is a gentle amble around picturesque Rome over one week. We see the sites as the men travel around but the movie is by no means a travelogue. Nicely paced by the director, Gianni Di Gregorio, who knows exactly what he wants as he co-wrote the film and also plays one of the lead roles

Citizens of the World is Available on Curzon Home Cinema from 12 June.