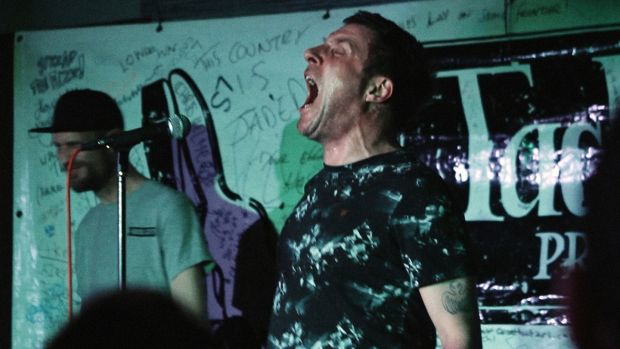 Christine Franz’s documentary on the potty-mouthed Nottingham punk duo, Sleaford Mods, makes Jason and Andy and their manager Steve look like bloody nice blokes. Which is really surprising, given the duo’s reputation as “Britain’s angriest band”.

Sleaford Mods are one of the few genuine home-grown independent music success stories of recent years. Thanks to their sweary rants about modern England, Jason Williamson, a former chicken factory worker, benefits adviser and father of two, his band mate, beatmaker Andrew Fearn, and their manager Steve Underwood, avant-garde bedroom label owner and former bus driver, have won over fans with their brutally honest lyrics and DIY ethos.

The film is a passion piece, not just for Franz who admits to having had “a band crush at first hearing”, but for every member of the production team, who volunteered in their spare time and during holidays. It is also fully self-financed, by choice. Franz says, “My idea was to make a film that was as DIY and as rough around the edges as the band itself”.

If you don’t know their music, Jason describes it as “electronic munt minimalist punk-hop rants for the working class and under”. To me they sound like a really angry John Cooper Clarke with a touch of Mark E Smith from The Fall. Jason’s tics and mannerisms are a performance in themselves and they certainly exude energy. Hey, Iggy Pop calls them the greatest rock and roll band in the world!

They are nice guys and so are their friends and family – many of whom we meet. Jason’s wife Claire gets in on the pottymouthing when she describes her husband’s two-week bad mood after a tour as ‘cunt flu’ … and there’s a lovely story from a mate who was working in another part of the studio when Jason first recorded: he heard the noise and thought ‘That sounds like Jason, he’s furious – who is he arguing with?’