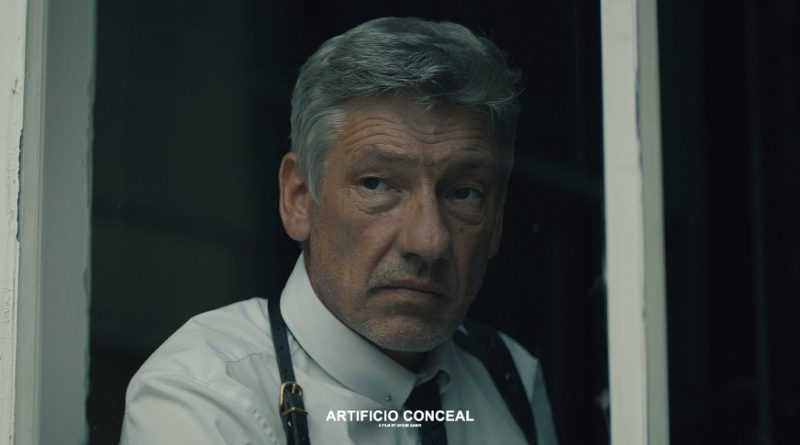 Artificio Conceal is a sterling sci-fi short that’s been accepted at Cannes this year – and for good reason. Set in what tastes like the not-too-distant future, the short revolves around a man (Whipp) who wakes up in an Interpol interrogation room.

After asking after his wife and child, he is confronted by a horrible truth – the agent leading his interrogation tells him that his mind has been hacked, and the memories of his wife and children are false – implanted by a mind-hacker, or ‘tracer’. But the real question isn’t what the tracer implanted, but rather what he took…

The short is perfectly balanced between the interrogation at Interpol and a meeting of criminal minds – the brains and dogsbodies behind the mind-heist; the entire story is a slow-burn, alternating between the discovery of and motive for the crime. Its denouement lays the biggest cards on the table with the highest stakes revealed. Artificio Conceal is arguably a done-in-one, merely dependent on whether you enjoy a cliffhanger with your story or not.

Writer-Director Ayoub Qanir is actively writing a feature-length adaptation of the short which will most assuredly be hotly anticipated, judging by the quality of this proof-of-concept. The concept itself easily draws comparsion with Inception – adventure being drawn from the dark recesses of our subconscious, albeit with memories, not dreams, being the gimmick (use of the word ‘gimmick’ here undersells the concept , however – the ideas on display here are clearly thought out and well executed). If the proposed feature does take off, Qanir already has a step-up thanks to the class-act-of-a-cast already in place.

If the seen-and-not-heard rookie Interpol agent played by newcomer Duran Fulton Brown is given center stage next go around, it could even be the makings of a star and the feature will be all the better for it. The man’s charisma pops off the screen and he doesn’t say a word.

David Bailie gives suitable menace to his scenes as the shadowy orchestrator, merely nibbling on his scenery as opposed to full-on chewing. Andrew Whipp sells his character’s woe and confusion toward a life thought lived and suddenly, brutally lost. The short, although the underdog when it eventually opens at Cannes, will be fully expected to come on like Gangbusters considering the talent attached, the integrity of the idea and its execution. If a feature adaptation fails to materialise following this it’ll be a great loss to the current sci-fi landscape.

With the Sony hack still fresh in everyone’s minds and the rise of seemingly-everywhere, nigh-on covert hacker groups like Anonymous, the concept of hacking has breached the mainframe of the zeitgeist like never before – what started with Michael Mann’s decent (if slightly cold) Blackhat looks to be evolving and expanding with Artificio Conceal.

Playing on the very-real fears of nameless, faceless intrusion into our electronic lives – a massive part of our modern societal DNA – Qanir presents us a terrifying next step; intrusion into our minds. Whilst brainwashing is nothing new in this genre, the ideas on display here are able to cut so much deeper. If our memories comprise who we are, what do we become when they are tampered with? If the only evidence the tamperer leaves behind are “fingerprints” on our brains, how much of him is left behind, imprinted on our very souls? Artificio Conceal wants to ask those questions. Let it.