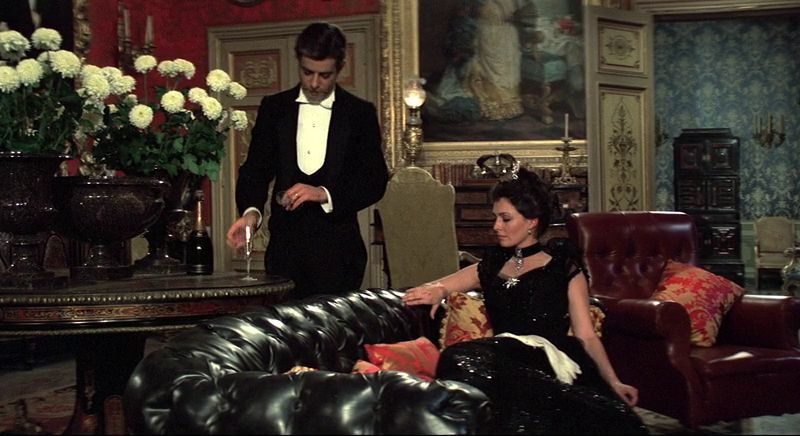 The Innocent was Luchino Visconti’s last film but it is highly regarded as a tight, taut little tale. I’d say that while it doesn’t have the wow factor of Visconti’s greatest films it’s a good way to start a relationship with the great director.

Tullio (Giannini) is an Italian aristocrat throwing himself into a renewed passionate affair with his mistress Teresa (O’Neill). When he hears that his wife Giuliana (Antonelli) is also having an affair, he sets about wooing her back – after all, it’s all part of the great game of love. But when Giuliana announces that she is pregnant with her lover’s child, Tullio’s laidback libertinism is sorely tested, with terrible consequences.

Of course, The Innocent looks fantastic but it seems relatively lacklustre in comparison with most of Visconti’s earlier films. It doesn’t have the sublime bustle of Ludwig, for instance, and so all the posh period settings and set pieces appear a bit constricted and lifeless.

The moral and dramatic issues at the heart of the film are a bit niche – libertinism (or is it just chauvinism?) versus Catholicism, anyone? – and despite controversial (for the late nineteenth century of the source novel) narrative elements such as abortion and single mothers there’s little of modern relevance in the moral quandaries facing the leads.

Tullio, as played by a debauched looking Giancarlo Giannini, is one of the real pleasures of the film. He is unspeakably lascivious and uptight (not a good mix), manipulative, selfish and aggressive. Not only is he a right arsehole, but he never gets to realize that until, perhaps, right at the end.

The other real pleasure here is the wonderfully abrupt editing from scene to scene. Cumulatively, it adds to the feeling that The Innocent is rushing along at a clipped pace (for a Visconti film, anyway). But the editing style folds into a narrative style and there are powerful narrative ellipses throughout the film. Perhaps the most astonishing is the reduction of the progress of Giuliana’s affair to her single hard look in the mirror at herself, after a series of rushed entrances and exits from their home. This shot contrasts wonderfully with the luxurious long shots over the naked bodies of Tullio’s conquests, which often seem to flip the film into 70s Euro-sleaze territory.

Who would have thought that Visconti could do telling details and dying falls as well as he does lingering operatic moments?

The Innocent is out on DVD, Blu-ray and digital download on 10 April.