Steven Spielberg is back to the genre he is best known for: a film appealing to children but with a lot to say to adults too. Safe in the hands of ET writer Melissa Mathison (who sadly died before the film was completed), Spielberg is able to indulge his imagination both visually and in the interpretation of Roald Dahl’s characters. Liked by families over the years, the book is brought to enchanting life in the filmic version of the Big Friendly Giant who takes a little orphan girl Ruby, on a trip of a lifetime: A journey which will change both their lives.

When the BFG (Mark Rylance) realises that young Sophie (Ruby Barnhill), who has been walking around the orphanage where she lives, has seen him making his way through her part of London late at night in the late 20th century, he takes her back to his home in Giant Country. Although she is worried about being eaten by the Giant, she is very safe with the friendly giant who delivers good dreams to children. They both fear the other giants, who like to eat humans, including the Fleshlumpeater (Jemaine Clement), and have to escape from their rampaging. They decide to approach the Queen of England (Penelope Wilton) to ask her to help them. Wilton makes an admirable Queen and manages to pull off the fart jokes – alongside her corgis – in a straight-faced manner.

Excellent motion capture and CGI make sure that the character of the BFG is fully realised so that it is a version of Mark Rylance. I love the way Rylance uses the language that Dahl gives the BFG so that he refers to “whizzpopping” (a kind of bottom burping or farting) and says his speech is “a little squiggly!” Rylance has a musical timbre to his voice and the gobbledegook he recites is almost like singing. He is a mighty fine actor and suits the role to perfection. Director Spielberg is able to get true performances from children and little Ruby Barnhill gives a very natural performance as 10-year-old Sophie and it is good to see a heroine of any age wearing glasses.

There are some beautiful shots as the BFG and Sophie take to the air and we see the countryside below them. It is not all laughter and fun; there are some scary moments with the human-eating giants and some sad ones as the BFG speaks of a young boy dying and Sophie has a not very happy life in the orphanage. The Spielberg touch of magic is shown in the film of two lost souls coming together to enjoy each others company and try to defeat the evil ones. It is highly recommended. 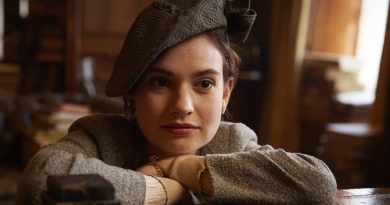 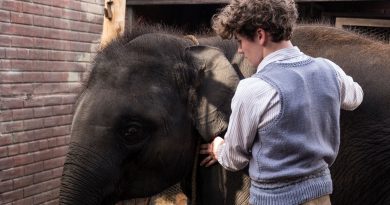