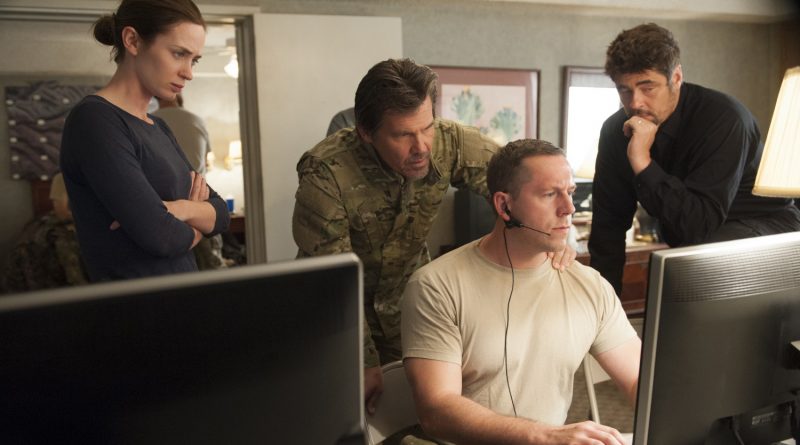 Denis Villeneuve’s border hopping character thriller was the kind of critically acclaimed sleeper hit that few saw coming in 2015. The tale of conflicted FBI agent Kate Mercer (Emily Blunt), thrust into a volatile off book mission to take down a drug lord in Mexico won its fair share of plaudits for its beautiful cinematography, brooding protagonists and near claustrophobic levels of tension.

As the aforementioned lead, Emily Blunt demonstrates every possible layer of angst, emotional and inner turmoil throughout her ordeal.Mercer’s idealism and pursuit of balance and justice puts herself on a direct collision course with the operation’s military lead Matt Graver (Josh Brolin) and his mysterious consultant Alejandro (Benicio Del Toro). Both serve as the uncompromising driving force behind the covert operation and Mercer’s sympathetic tormentors.

Whilst Mercer and her side kick Reggie’s (Daniel Kaluuya) involvement legitimises proceedings, her refusal to play the patsy is only tempered by her willingness to survive the twists and turns through the streets, banks and illegal underground border tunnels of Mexico. A toxic mixture of police corruption and money laundering on both sides of the border culminates in several visually arresting set pieces. Most notably a vast panning sequence as the operatives attempt to escort a key Drug Lord through the crowded streets and roads of Juarez. An interesting sub-plot focusing on one of the corrupt cops acting for the Mexican cartel and his family, is threaded with an even hand throughout.

Villeneuve ratchets the tension and unease throughout with slow, deliberate rising helicopter shots, and an unresting score from Jóhann Jóhannsson. The theatrical and musical artist’s low frequencies and near subliminal, visceral pulsing helps to add to the emotional horror.  Jóhannsson’s cellos and orchestral drones give the desert and unforgiving urban ghettos of Mexico their voice and have earned him an Oscar nomination.

The film’s incredible technical qualities are sometimes offset by the slow and often plodding pacing. The complex character development and reflective nature of the film sometimes reduces it to a near crawl. The action is stark and unforgiving but not drenched in bombast and needless adrenalin soaked explosions. This is not Die Hard or Mission Impossible, the payoffs and set pieces are more disturbing than satisfying.

Sicario is both a visual and thought provokingly brutal autopsy of the Mexican drug trade, and an unsettling character study that questions the lines between morality and necessity.

Extras:
The home release is light on new material so don’t expect deleted scenes or alternate endings. The Blu-Ray comes with a handful of short but engaging featurettes.

The lead featurette ‘Stepping Into Darkness’ led by director Villeneuve and cinematographer Roger Deakins looks in detail at the visual design and story boarding process behind Sicario. Discussing the film’s beauty, realism and darkness, it takes you through the heart of the film’s locations and examines the gritty, authentic docu-drama feel and composition of the film.

Several other featurettes include lead cast interviews focusing on their characters and portrayals, a detailed look at Jóhannsson’s intensely menacing and melancholic score before culminating in a look into the world of violent crime and drug cartels that inspired Sicario’s script.