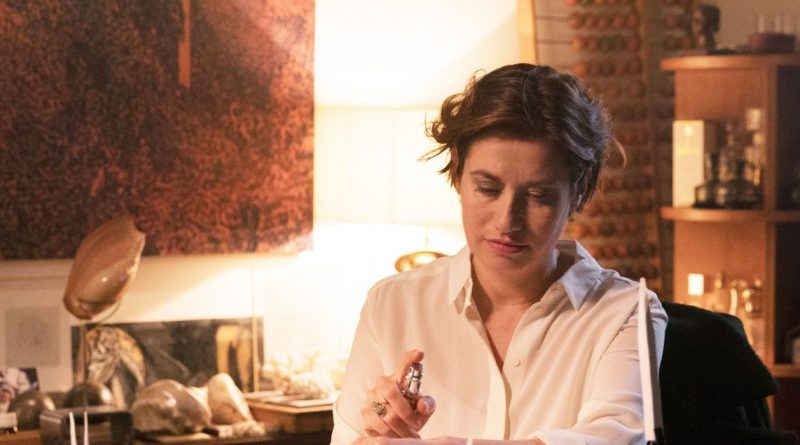 By the end of this film you will have a good idea of what it takes to really appreciate the smell of perfumes. The importance of a good nose is personified by Anne Walberg (Emmanuelle Devos). Although she was once a famous ‘nose’ responsible for making a very well-known perfume, something happened – we learn what some way on in the movie – to reduce Anne to looking after business clients who want, for example, to disguise the smell of the leather in their handbags, or cover the bad odor emanating from a factory.

Gregory Montel plays Guillaume, a struggling single father who is desperately trying to make a good living in order to buy a better apartment so that he can share joint custody with his ex-wife. At the moment he lives in a studio apartment with a pull-down bed, seeing his 10-year-old daughter for short, not very satisfactory, periods. He works as a chauffeur continually in danger of losing his job. He needs permanent employment to secure his future.

When he is hired to drive Anne around, he thinks it is just for one day. Even that is difficult as he has to put up with her arrogant manner because she acts like a diva and is often rude.Before he leaves her, Guillaume tells her exactly how he feels, expecting never to see her again. Surprisingly she keeps asking for him to drive her around. They form a bond and the chauffeur is taught how to smell things properly. In spite of their vast differences, the two make a connection and help each navigate difficult times in their lives.

Devos is just right in the part of a bossy, know-it-all star and Montel manages to match her in his very different role. There is, too, a charming performance by young Zellie Rixhon as Guillaume’s daughter. She is another child actor who gives such a natural display of her talents that it makes one hope to see more of her in the future.

The film develops in quite an unusual way. It is good to see a movie about middle-aged adults for a change. Altogether a pleasant little film. Go see!