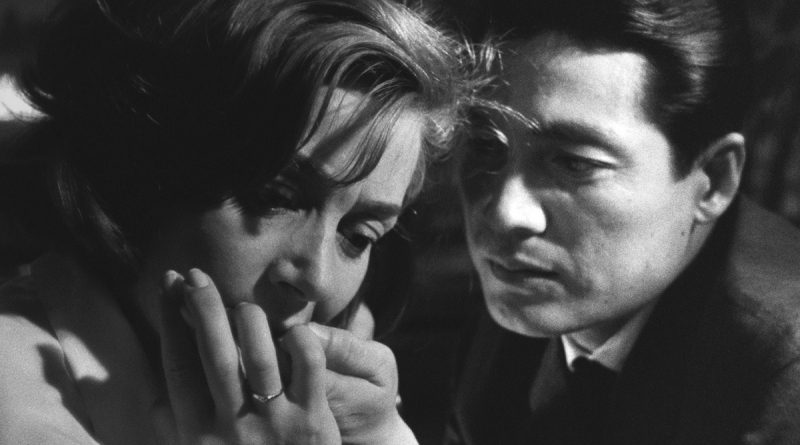 Directed by Alain Resnais, Hiroshima Mon Amour, nominated for Best Screenplay at the 1961 Academy Award, is considered a classic of cinema history. It is considered to be one of the most influential films of all time; a masterpiece that weaves past and present, personal pain and public anguish. The film is always to be found in lists of the best films ever, such as those compiled from time to time by Sight & Sound.

The film is a complex study of a troubled relationship set in post World War II Japan. Emmanuelle Riva (Amour) stars as a young French actress who is in Hiroshima for the shooting of a film about peace; where she meets a Japanese architect, played by Eiji Okada (The Ugly American), who reminds her of a former lover, a German soldier. The film is an intensely personal conversation between the two lovers about memory and forgetfulness, whilst comparing failed relationships with the bombing of Hiroshima and the perspectives of people inside and outside the incidents. Scripted by acclaimed novelist Marguerite Duras (The Lover) who was Oscar nominated for the screenplay, the film uses highly structured, repetitive but memorable, dialogue.

The film was Resnais’ first feature and bought him instant fame. André Malraux, the noted French novelist (La Conditione Humaine), art theorist and distinguished politician, acclaimed Hiroshima Mon Amour to be the most beautiful film he had ever seen, and I am certainly not going to argue with that description.

Hiroshima Mon Amour has been widely celebrated for its originality. Among the film’s innovations is Resnais’ experiments with very brief flash-back sequences intercut into scenes to suggest the idea of a brief flash of memory creating a unique non-linear storyline. Resnais later used similar effects in The War Is Over and Last Year at Marienbad. New Wave filmmaker Jean-Luc Godard celebrated its originality, calling it “the first film without any cinematic references”.

The film was seen as a game-changer of 1950s French cinema, and pioneered the rise of the French New Wave cinema. It led the way for Resnais’ award-winning career, including acclaimed films Last Year at Marienbad and Smoking / No Smoking, through six decades until his death in 2014.

The quality of the transfer is impeccable. The Extras were somewhat sparse, comprising just two items, namely Emmanuelle Riva remembers Hiroshima, and a restoration featurette. It is a shame that more material could not have been provided. However, remembering the old adage, Quality Not Quantity, I found the restoration Featurette alone made up for the shortcomings on the quantity of extras. That said, not everyone will find it as interesting as I did as it deals with the technicalities of the restoration, but with some additional comments on the continuing digital versus film debate – subjects of great interest to me.

The 4K restoration of Hiroshima Mon Amour was undertaken in 2013 by Argos Films, the Technicolor Foundation, the Groupama Gan Foundation and Cineteca di Bologna with the generous support of the CNC (or Centre National du Cinema). The work was carried out at L’Immagine Ritrovata, Cineteca di Bologna’s restoration lab, under its director, Davide Pozzi, and overseen by DP Renato Berta.

L’Immagine Ritrovata had carried out a restoration of a 1970s film that had been shot by Renato Berta who had told Allain Resnais about it, and how fantastic the results were. Resnais was interested in a restoration of Hiroshima Mon Amour but was not in a position to be able to oversee the restoration himself. So Berta agreed to oversee it.
According to Pozzi there are two phases in a restoration, the first being the more mechanical repair and clean of the film, before the second phase which is of a more subjective nature, and it is the second phase in which Berta, on behalf of Resnais, would be involved.

Berta found himself thinking a lot about the restoration. If he had created the images in Hiroshima Mon Amour then he would, as originator, know what direction to take for their restoration. He knew the film but not very well, but, having worked with Resnais on four films he felt that they could communicate fairly well. Working with the film made Berta think of other films, the work of deceased directors done by people who barely know the film. He knew what they did. Night shots, day shots, all sent through the same setting! They managed to make all the scenes match with the final result often being disastrous. He was determined that this should not happen to Hiroshima Mon Amour.

Pozzi’s team used camera negative which was still available, although the condition was uneven, with some reels more damaged than others. The film was scanned at 4k resolution with the reels in best condition having a dry-gate scan, but, for the more damaged reels, a wet-gate scan was carried out which attempts to correct fairly serious problems caused by the passage of time. Once scanned then the images were cleaned with 1700 hours being taken up on image stabilisation, removing scratches, black spots and white specks to obtain clean images. With the sound restoration, part is mechanical and part more subjective. Optical negatives were cleaned of clicks and pops in a neutral way as Alain Resnais preference, and then the restoration carried out using screening copies from back then to make sure it sounded as it did then.

Berta watched the whole film before restoration, pausing at places where there were doubts. Then, according to Berta, comes the part which is to interpret, in particular, the work of the cinematographer, but also the director’s especially since it’s a film set In different times with very different visual styles. It was shot by two different cinematographers, with different lighting and different atmosphere, in different dramatic situations. When in doubt Berta would ring Resnais for his advice.

Controversially, for film as opposed to digital aficionados, Berta wished to point out that, “At the risk of disappointing many of my colleagues, I think the blacks we obtain in digital are more interesting than those in film.” He had a valid scientific assertion for this, but it is more understandable to those of us who had experience with film developing with chemicals. We learned of the “characteristic curve” which covered film negative density of exposure against development. He says that, in digital, it is not a curve but a diagonal line which means, that, in digital, you can take the blacks very far. Of course, he appreciated entirely that, if you asked other cinematographers, they would say the opposite. Basically he is saying that there is a greater range of blacks than in film and what he finds “very interesting in digital is its reproduction of blacks much more than going from negative to positive in film”. “Today”, he says, “the entire photochemical chain is almost extinct. It’s a different material – it’s not cellulose triacetate – or emulsions – it’s a totally different medium so obviously that changes things……It seems laughable when I hear cinematographers say, ‘I absolutely must shoot on film’. Then they do colour correction in digital and then print on film. Why not just shoot in digital?
They treat it as almost a religious issue – not a technical one.”

Hiroshima Mon Amour is a must-see experience that will stay with you, and your enjoyment will be only enhanced when you see the Blu-ray version.
Review by Eric Jukes