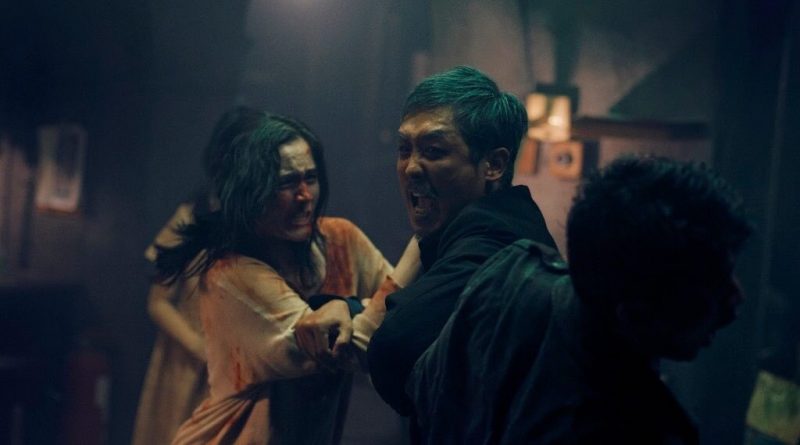 The Bourne Identity meets The Raid in this periodically very violent Indonesian action film, which showcases the silat (Indonesian martial art) fighting skills of the great Iko Uwais (from the great The Raid films and some recent Star Wars shit).

A headshot man (Uwais) is washed up on a beach and saved by a female doctor (Estelle). He has amnesia, so the doc calls him Ishmael (she’s currently reading Moby Dick). A scuffle in a hospital ward suggests that Ishmael, despite his boyish good looks, is a lean, mean, killing machine with a history of extreme violence.

Ishmael’s presence in the hospital comes to the attention of incredibly nasty crime lord Lee (Pang) and his thugs. Lee has history with Ishmael, a history he wants to bring to a violent conclusion. A chase begins, with every bone snap and eye gouge he performs bringing Ishmael closer to a recognition of who he is, and to a well-matched showdown with the older man.

Headshot is a manic ride, as in manic depression: intense highs followed by doldrums, moody lows that only go to show how clunky the Mo Brothers (aka Kimo Stamboel, Timo Tjahjanto) are as film makers.

Sometimes the contrasting moods work, especially in a climactic fight scene on a beach where blows, cuts and parries are interspersed with deep discussions about personal psychology. This kind of manic outcome is rather fun.

It’s some of the slow reveal shots that got me: the camera focuses on a character then pulls away slowly, teasing us with a long, slow reveal of the dramatic thing they are looking it. It’s a stock shot for arthouse film makers like Angelopolous but in the middle of an action film it looks more mannered – and anyway, what is revealed is badly framed! The fight scenes, on the other hand, are a good mix of close-up and centrally framed figures.

We’re here for the violence and there’s loads of it. The film starts with a couple of extreme automatic weapons shootouts, which are almost a letdown because one comes expecting ‘mano a mano’ mayhem. But the film delivers the latter in an extended orange office-set fight sequence as well as several other scenes. Overall, Headshot feels a bit parsimonious with the hand-to-hand fighting, perhaps to keep us hungry for more?

This is violence where pain is registered and the hero can’t always kick successfully against the inertia of bodies, objects and situations. It’s not realism, of course not, and it feels like a guilty and slightly distasteful pleasure to watch Headshot given the recent series of stabbings and punch-based murders and manslaughters that have been in the news. But Uwais is such an amiable presence, looking like a fit, hard David Miliband and incarnating the victim who is prepared to defend himself rather than the aggressor, that I find it easy to excuse the violence.

Some of which has real-world resonances: there’s a disturbing shooting on a bus that veers close to news headlines, so much so that the follow-up fight involving Uwais falls a little flat.

I have grown to like the manic mix of violence and introverted doldrums that characterises Asian action films. If you have too, you’ll love Headshot.

Headshot is out on DVD, Bluray and download on 5 June.