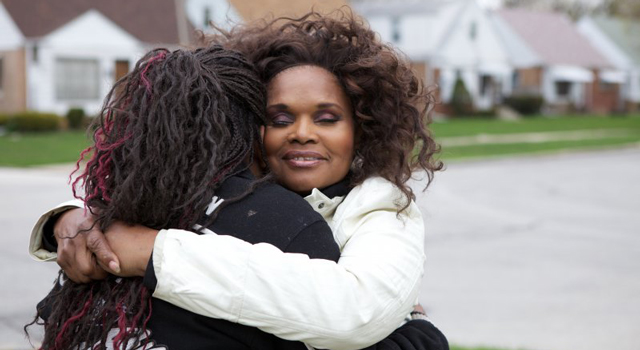 Brenda Myers-Powell is a former prostitute who, following a violent encounter with a customer, decided to change her life and now dedicates her time to helping young women still in the game through her non-profit organisation, Dreamcatcher. Dreamcatcher is a film that follows her exploits as she counsels incarcerated prostitutes at the local prison, at-risk teenage girls at a local high school (which looks more like a prison), and cruises the most dangerous neighbourhood for young women “turning tricks”, where she hands out condoms and safety tips to vulnerable girls (some as young as 14).

She encounters one young woman, carefully listens to her story and soon is helping this downtrodden lady realise that her life can be so much more. It’s inspiring to see someone who can not only help women in these horrifying situations and lifestyles, but is in fact the best possible person to help – having gone through the exact same experiences herself. When the film introduces us to at-risk women on the street, you can see their defences lower as soon as Brenda reveals herself and her own past; it’s an interesting snapshot of the comradeship that blossoms between these people, all caught up in the same vicious cycles – with Brenda rightfully preaching an alternative that will not come easy but is worth the hard work.

Dreamcatcher is full of fascinating snapshots of life for victims of human trafficking in the Chicagoland area; from the young ward Brenda has taken it upon herself to help, a victim of grooming from a young age, with no support or sympathy from her mother, who with Brenda’s help got off the street-walking scene at the age of 15, to a pimp that Brenda used to know, now reformed and helping Brenda to educate the youth of today as to the dangers and horrors of the life of a sex worker.

The recurring theme that comes up through the film is the sense that each of these people, after years of abuse emotional or otherwise, become trapped in their ways, self-blaming and becoming their own worst enemies; you can’t save someone who feels they don’t deserve to be  saved.

Brenda Myers-Powell’s struggle to prove these people wrong is an absorbing watch; the distressing scenes and stories you lay witness to may hollow you out, but by the end, a spark of hope will be re-lit somewhere within you.