Cinema has long been attracted to wilderness survival tales, perhaps because so few of us ever undergo such physically and emotionally demanding feats. The films tend to emphasise the beauty but also the uncaring savagery of nature, the harshness of the elements, and there is usually at least one gruesome ‘dining’ scene – think of Leonardo DiCaprio eating raw bison liver in The Revenant.

Couple in a Hole sits somewhere in this tradition but is no neat fit. A strange tale of a Scottish middle-class couple eking out a feral existence in a mountainous French forest region, the film revisits the above mentioned themes but provides a fresh spin on the subject. It has a distinctively idiosyncratic tone, best exemplified by the film’s own take on the gross-out eating scene that, if anything, is even more memorable than DiCaprio’s, if only for its mysteriously enigmatic atmosphere.

Early in the film an emaciated woman, Karen (Kate Dickie), crawls out of a muddy cave-like hole to cautiously stand before her husband John (Paul Higgins). As John feeds her a fat, juicy grub, he begins to count out loud, seemingly timing his wife. Dickie’s physically awkward performance, a mix of grimaces and ungainly movements, suggests a certain derangement. Her triumphant smile at her strange actions makes us wonder what on earth is going on – has some disaster occurred? Are the couple starving in the wild? Are they survivalist extremists? The answers are only gradually revealed.

Couple in a Hole is an intriguing film. It has similarities with ‘slow cinema’ but is more narratively driven than first appearances might suggest. Early scenes document the natural environment and the couple’s situation within it: for reasons that are not immediately clear, they live in a woodland hole that Karen is frightened to leave and John decamps from only to hunt and gather. But, little by little, subtle clues shed light on their unfortunate situation. When John warily seeks medical help for Karen at the local village, he is aided by a friendly but intrusive local farmer, and events unfold that inexorably lead to the source of the couple’s sorrow and to further tragedy.

Director Tom Geens clearly has a deft command of his craft. Couple in a Hole is beautifully shot, conjuring sublime moments from the Midi-Pyrénées landscape. The rhythm too is skilfully constructed, with the film combining an unusual, tension-inducing mix of mundane but offbeat activities, sudden bursts of brutality or violence (watch out for the nail-biting axe scenes), and occasional moments of unexpected tenderness. This curious blend sustains the momentum despite the deliberate pacing, minimal plot and sparse dialogue, all of which might hinder identification with the couple. But Dickie’s and Higgins’ performances convey such a real sense of who these people are that this is never an issue.

The lack of expositional material does mean, however, that Couple in a Hole feels at times like a short story drawn out to feature length. The choice of music doesn’t help, with BEAK>’s indie/electronica (a side project of Portishead’s Geoff Barrow) seeming incongruous for the setting and emotional undercurrent, bringing overtones of an arty music video. Geen could have simply stuck with nature’s ambient sounds, which are used to great effect as the film harnesses their power to frighten and to surprise.

But there is still much to admire. From small roots springs an unconventional, atmospheric drama that manages to be both a meditation on grief and sorrow as well as a genuinely novel approach to depicting the difficulties involved in living apart from civilisation. Life in a hole may not sound very appealing, but, unexpectedly, it provides oddly fascinating viewing. 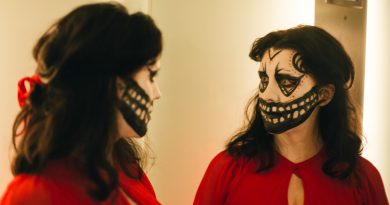