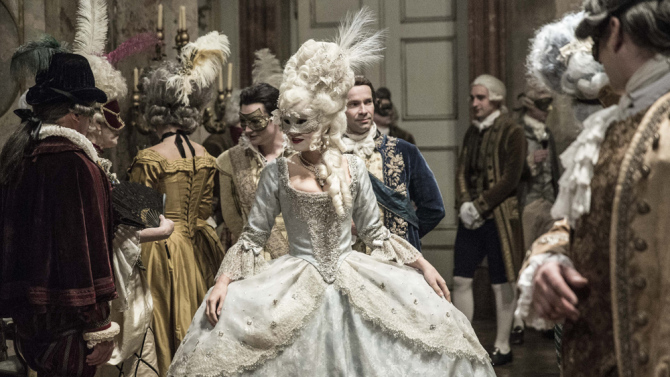 Well, “Amadeus” this isn’t.  Forman’s film was a big guns Hollywood extravaganza with an estimated budget of $18 million – and that was in 1984, so goodness knows what it would cost now.  For comparison the recent remake of “Ben Hur” is estimated at $ $100,000,000.  The British made “Interlude in Prague” was made for a mere £5,000,000 (a bit over $6.5 million).  So it would be unrealistic to expect it to look as good as a big bucks Hollywood product.

This fictional story initially does have echoes of Schaffer’s masterly invention.  Mozart (Barnard) is invited to put on his operas in Prague by a wealthy patron Baron Saloka (Purefoy).  The composer is working on a new opera “Don Giovanni”, which is influenced by this relationship, which again is one of jealousy.  But the Baron, who is ruthless womaniser and a thoroughly evil piece of work, is not jealous, as Salieri was, of Mozart’s musical talent but of his success with women, particularly the Baron’s fiancée Zusannah (Clark), a talented young soprano, who falls for Wolfgang big time.  And the Baron’s revenge is murderous.

Going back to that budget comparison, “Interlude in Prague” falls well short of the extravagant beauty we have been led to expect from period drama.   But it has a jolly good stab at it with pretty period costumes and authentic settings, while the film’s cinematographer Mike Brewster makes a valiant effort at reproducing the candle lighting for the interiors that Stanley Kubrick pioneered in “Barry Lyndon” back in 1975 – though with somewhat murky results at times.  To be fair, those scenes in “Barry Lyndon” also left us a bit peering through the gloom.

Prague is a city who loves having her photograph taken but perhaps because of the tight shooting schedule the film fails to take full advantage of the beauty of her exteriors.  One location which is both stunning and really intriguing however is the period theatre, where the many opera extracts in the film were shot.  This theatre with its complex stage machinery and scenery of the period and an auditorium, where the beautifully dressed audience members sit on humble benches in the stalls or stand in the circle area, is one of the most intriguing aspects of the film.

Beautifully mounted as these opera scenes are, the women’s heavy period make up for such performances does though have the effect of making it very difficult to distinguish the actresses from one another when performing.   One of them is Samantha Barks, in good voice as Josefa Duchek, star soprano of the period and Mozart’s friend and muse.  And there’s lavish use of the composer’s music throughout, to the extent that the soundtrack sometimes sounds like a compendium of Mozart’s greatest hits.

There are some talented actors in the cast.  Barnard as Mozart has a lot of charm though limited opportunity for passion and fire.  Clark is appropriately virginal and vulnerable as Zusannah, but apart from performing well known arias from the operas, Barks is a bit wasted in role which is very much a supporting one.   Purefoy has the difficult task of presenting a character with no redeeming characteristics whatsoever – we first see him with a haughty sneer on his face and from then on it’s downhill all the way into debauchery, rape and murder – not a nice man at all.   And there’s a good performance from Adrian Edmondson as Zusannah’s father, who stubbornly refuses to believe the stories of his future son-in-law’s womanising, blinded as he is by the grandeur of the Baron’s family tree.

The story behind the film is interesting in that it’s writer and co-producer is 81 year old retired property developer Brian Ashby, who has been working on the story for many years and only got to make it as a film, when a friend in the Mensa organisation introduced him to her contacts in the film business, who then enabled him to develop it into a movie.

The result is to be honest a bit modest in its achievement.   But what do you expect for the price of a couple of comparatively modest houses in London these days and a one month shooting schedule?  And it does demonstrate that you’re never too old to follow your dream! 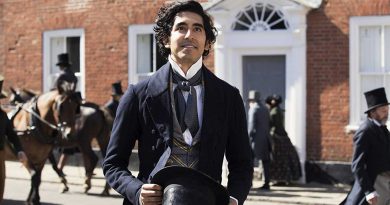 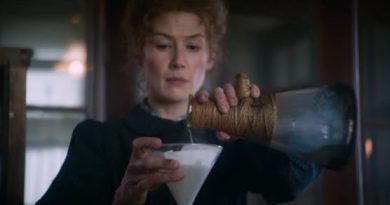