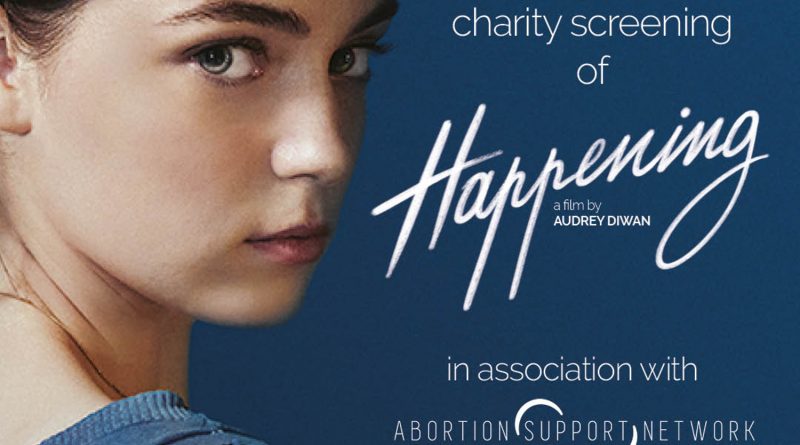 Picturehouse Entertainment is partnering with cinemas across the UK to host a series of charity screenings of HAPPENING as a rapid response to the breaking news about Roe vs Wade in the US. The profits of these screenings will be donated to the Abortion Support Network. The screenings will take place on Wednesday 8th June, with tickets going on-sale from today at HappeningFilm.com.

The winner of the Golden Lion at the Venice Film Festival, HAPPENING shows the realities of those who are unable to make a free choice about their own sexual health decisions. Picturehouse Entertainment and all participating cinemas stand in solidarity with those fighting to continue access to abortion care.

ASN supports people from the Republic of Ireland, Northern Ireland, Poland, Malta, and elsewhere in Europe to access abortions by providing information and funding for those who have to travel. They are a member of the Abortion Without Borders initiative, which has helped more than 40,000 clients from Poland to access an abortion since it launched at the end of 2019.

HAPPENING is directed by French film-maker Audrey Diwan (Losing It) and features a stand-out performance from rising star Anamaria Vartolomei. The film is adapted from the autobiographical short story written by respected French author Annie Ernaux, entirely based on the recollections of her own experiences. The charity screenings follow on from the film’s nationwide cinema release last month.

Happening is set in France in 1963 and tells the story of Anne, a bright young student with a promising future ahead of her. But when she falls pregnant, she sees the opportunity to finish her studies and escape the constraints of her social background disappearing. With her final exams fast approaching and her belly growing, Anne resolves to act, even if she has to confront shame and pain, even if she must risk prison to do so.

Mara Clarke, Founder of ASN, says:
“We are thrilled to be part of this screening event with Picturehouse entertainment. Happening reminds us that people will do desperate things not to be pregnant, that medical professionals can be obstructive to women seeking abortions, and that sometimes the radical empathy of a stranger is the bridge between someone and the abortion they need. We hope people who see the film are inspired to learn more about the current state of abortion rights in the UK and Europe, and to get involved with local activism.”

The Happening charity screenings will take place in over 45 cinemas nationwide with more venues likely to be confirmed.