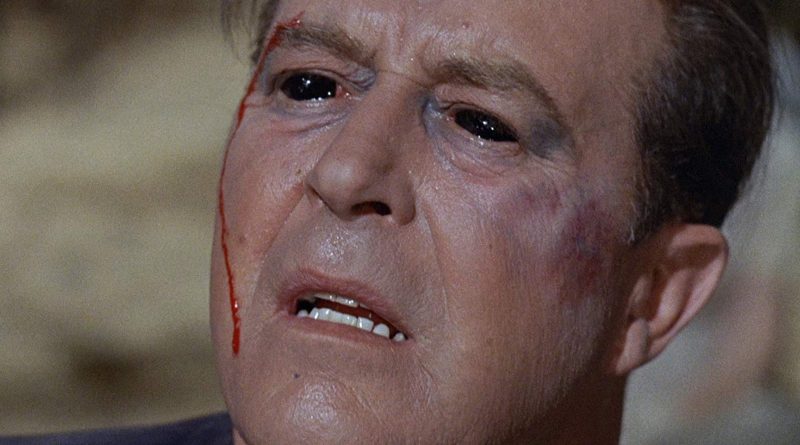 This low-budget, deliriously pessimistic film has always been a favourite of mine.

I suspect that’s because it is a movie that is full of foreboding about the future. Historically, it captures an uneasy pop culture vibe as the post-war world turned into the counter-cultural 60s. Its mood is heavy with unease, even cynicism about that change.

Even better, if The Man with the X-ray Eyes is a gateway to the psychedelic 60s, it’s one with a shlocky, Technicolour warning written above it. As well as some lovely moments of unhinged social commentary and existential philosophy and even a dab of cosmic horror.

Dr James Xavier (Milland) is a respected, slightly pompous, middle-aged surgeon running a risky piece of research. He is experimenting with eyedrops that would give medical staff three-dimensional views of the interiors of their patients’ bodies. When his funding is stopped, he continues to experiment on himself with disastrous consequences.

As Joe Dante points out in an extra included here, The Man with X-ray Eyes was a technical try-out for Corman’s 1967 The Trip, which definitely embraced the psychedelic 60s. But X-ray Eyes is a more unnerving film, not least because it displays an unease about the trappings of the comfortable professional life (the well-groomed people in natty suits, the cocktail parties) and shows that lifestyle flipping out into uncertainty and disease.

The film plays with the perennial idea of damaging revelation, here as an ability to actually see the truth. Xavier’s damaged talent moves him from medical establishment to carnival freakshow, from faith healing charlatanism to catastrophic biblical revelation. If the X-ray “trip” sequences look like blurred architectural outlines – more like migraine than psychedelic experience – that is utterly appropriate. Those ecstatic instances when Xavier describes his visions are moments of prophecy-in-pain.

The eerie Les Baxter soundtrack includes some wonderful warbling by the great Yma Sumac. Corman’s unhurried direction and pacing give the film a monumental quality that fits with its allegorical theme.

The Man with the X-ray Eyes has never looked lovelier than in this new restoration. There’s a new interview with the great director and the Joe Dante mini-feature gives good context.