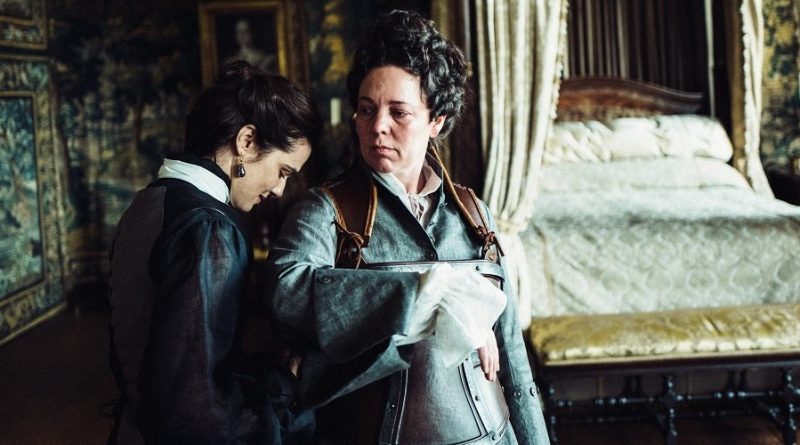 It is England in the early 18th century and Queen Anne sits on the throne. But it is her bosom pal and close political companion who determines what the Queen decrees. Anne (Olivia Coleman) relies on Lady Sarah Churchill (Rachel Weisz) completely even for bedtime favours.

When Abigail (Emma Stone) arrives, Lady Sarah feels herself gradually pushed out. Abigail provides a remedy for the Queen’s gout and carefully insinuates herself into Anne’s life. The Queen falls under her spell and welcomes her into her life at court and administrations in her bed. Politically the two competing Parties – the Whigs led by Lord Godolphin (James Smith) and the Tories, led by Robert Harley, Earl of Oxford (Nicholas Hoult) – try to get first Sarah and then Abigail on their side.

Helen Edmundson’s play, Queen Anne, had great success at Stratford in December 2015 and then later in the West End. The film, as directed by Yorgos Lanthimos, is far racier. Although it is similar to the play in the main, it is far sexier and more colourful.

The film centres on the relationship between the three women and the director is served well by the marvelous Olivia Coleman as Queen Anne and the two women who compete for her patronage. Coleman shows Anne’s vulnerability as well as her pain at coping with her many ailments. She is most affectionate to her 17 pet rabbits – she has one for each of her children who died when being born or as babies or in early childhood. Rachel Weisz is excellent as Lady Sarah, who, at the start of the film, is fully in control of the Queen’s political life as well as her personal needs. Sarah finds it very difficult to come to terms with conniving Abigail – beautifully played by Emma Stone, who connives to be first in the Queen’s life, both public and private.

The film is well cast throughout, right down to the tiniest of parts. Nicholas Hoult, in a variety of wigs, each one more outrageous than the last, is particularly amusing as Robert Harley. Well-directed by Lanthimos who manages to throw in some very funny scenes showing court life at the time, such as pelting a large naked man with oranges. The film is sexy, amusing and female orientated. This is definitely one to see.